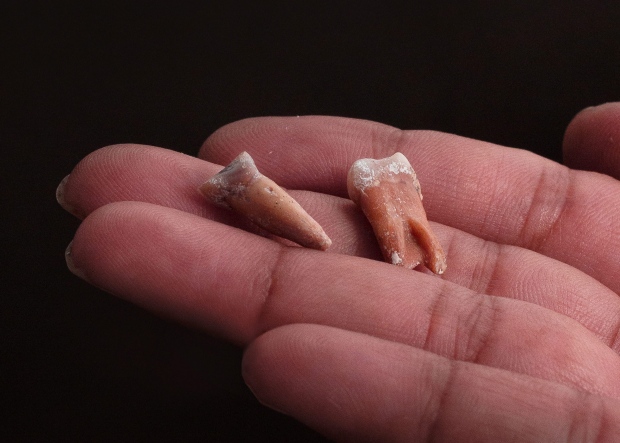 Fossils of the first Homo floresiensis [nicknamed the hobbit for its small size], which lived between 60,000 and 100,000 years ago and died out just before or at the time when Homo sapiens arrived in the region, were found at Liang Bua cave on the Indonesian island of Flores in 2003.

A close relative of modern humans, the fossils suggested that the hobbits had extremely small brains (400 cubic centimeters), stood only about 106 cm (3’6″) tall, and weighed around 30-40 kg (66-86 lbs). The discovery sparked debate around the origin of the species, with some experts claiming that hobbits’ short stature was the result of Down’s syndrome or Microcephaly.

However, paleoanthropologists have now excavated a lower right jaw fragment and six teeth from at least one adult, and two children from layers of sedimentary rock near Mata Menge, a site merely 43.5 miles from Liang Bua. The fossils of ancient hobbits or Hominins, which appear to be the ancestors of Homo floresiensis, pre-date Homo floresiensis at Liang Bua by more than half a million years. Dr Gert van den Bergh, from Australia’s University of Wollongong’s Centre for Archaeological Science, observed that the Hominins became victims of insular dwarfism after the large-bodied Homo erectus spread to Indonesia and got trapped on Flores:

“Remarkably, these fossils, which include two milk teeth from children, are at least 700,000 year old. This find has important implications for our understanding of early human dispersal and evolution in the region and quashes once and for all any doubters that believe Homo floresiensis was merely a sick modern human (Homo sapiens).

“It is conceivable that the tiny Homo floresiensis evolved its miniature body proportions during the initial 300,000 years on Flores, and is thus a dwarfed side lineage that ultimately derives from Homo erectus. It is also possible that this lineage pre-dates the first hominin arrival on Flores, implying speciation occurred on a stepping-stone island between Asia and Flores, such as Sulawesi.”

Insular dwarfing is a process where creatures migrate across land bridges during periods of low sea level, get marooned on islands as oceans rise, and grow smaller because of isolation and diminishing food supplies. If the founding population was indeed Homo erectus, then its stature would have decreased by about one-third (to around one meter tall) and its brain size shrunk by half within 300,000 years, reports ft.com. When the hobbit remains were first found more than a decade ago, the researchers also discovered evidence for a pygmy elephant, suggesting that a pachyderm also underwent island dwarfing at Flores.

According to Dr Yousuke Kaifu, from Tokyo’s National Museum of Nature and Science, the findings suggest the Hominins lived in hot, dry savannah-like grasslands interspersed with wetlands.

“All the fossils are indisputably hominin and they appear to be remarkably similar to those of Homo floresiensis. The morphology of the fossil teeth also suggests that this human lineage represents a dwarfed descendant of early Homo erectus that somehow got marooned on the island of Flores. What is truly unexpected is that the size of the finds indicates that Homo floresiensis had already obtained its small size by at least 700,000 years ago.” Alongside the Mata Menge fossils, the scientists have also found simple stone tools similar to artifacts found with the Liang Bua hobbits. However, it remains uncertain whether the ancestors of tiny hobbits evolved miniature body proportions before or after they landed on Flores. Future research will seek to uncover more hominin fossils from the Mata Menge site and from older sites nearby in the So’a Basin, which are about 1 million years old, to help solve the mystery of the lineage to which the Mata Menge fossils belongs.

This article (Tiny Hobbit-Like Humans — Dating Back 700,000 Years — Found in Indonesia) is a free and open source. You have permission to republish this article under a Creative Commons license with attribution to the author and AnonHQ.com.