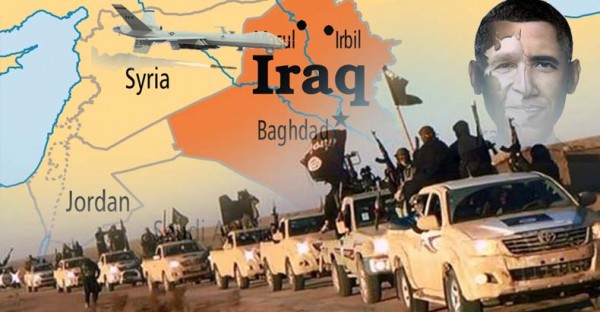 As many of us already know, the United States War Against Terror in the Middle East—especially the one that took place in Iraq after the 9/11 attack—was a fundamental mistake. To accompany the arrival of this new-found revelation, it appears more influential people in the US are beginning to speak against these wars.

Since the emergence of Islamic State or Daesh, as the group is known in Arabic, Western Nations have sat on tenterhooks while the group sounded the alarm bell—the key example being the attacks in the French capital, Paris last month.

But, after sitting back and analyzing the situation critically, it is an indisputable fact that some of these extremist groups emerged after the fall of some leaders championed by Western Nations, especially the US. Former director of the Defense Intelligence Agency of the US, General Michael Flynn, has just given us a more detailed insight of some of the events that have helped create and nurture a group like Daesh.

As the highest ranking military intelligence officer, Flynn served as the director of the Defense Intelligence Agency, commander of the Joint Functional Component Command for Intelligence, Surveillance and Reconnaissance, and chairman of the Military Intelligence Board from July 24, 2012, to August 2, 2014. The Free Thought Project adds that prior to this, General Flynn had served as an assistant director of National Intelligence within the Obama Administration.

Flynn left the administration in 2014, and has begun to speak out against the wars in Afghanistan, Iraq, and Libya, and how it has led to the rise of Daesh.

In an interview with the online news source Spiegel, Flynn categorically stated that the US’s foreign policy of fighting terror abroad has helped create and foster the growth of terrorism worldwide.

To back his argument, he made a reference to the capture of the current leader of Islamic State [Daesh], Abu Bakr al-Baghdadi, by US forces in 2004. Al-Baghdadi was later set free for no reason. When Spiegel asked Flynn why this was done, Flynn replied with the following statement:

“We were too dumb. We didn’t understand who we had there at that moment. When 9/11 occurred, all the emotions took over, and our response was. Where did those bastards come from? Let’s go kill them. Let’s go get them. Instead of asking why they attacked us, we asked where they came from. Then we strategically marched in the wrong direction.”

To let you read the unedited interview and judge for yourself, featured below is a portion we have sourced from the Free Thought Project.

SPIEGEL: The US invaded Iraq even though Saddam Hussein had nothing to do with 9/11.

Flynn: First we went to Afghanistan, where al-Qaida was based. Then we went into Iraq. Instead of asking ourselves why the phenomenon of terror occurred, we were looking for locations. This is a major lesson we must learn in order not to make the same mistakes again.

SPIEGEL: The Islamic State wouldn’t be where it is now without the fall of Baghdad. Do you regret …

Flynn: It was a huge error. As brutal as Saddam Hussein was, it was a mistake to just eliminate him. The same is true for Muammar Gaddafi and for Libya, which is now a failed state. The historic lesson is that it was a strategic failure to go into Iraq. History will not be and should not be kind with that decision.

ISIS’s goal from their own publication. A black & white world. What they call “grayzone” is our coexistence zone. pic.twitter.com/dDPqigam4t

Flynn has spoken his mind; however, the huge error he talked about has resulted in millions of lost lives, and has now even brought humanity to the brink of total annihilation, with the threat of World War III looming on the horizon.

For Islamic State, their very objective is to spark a brutal war that will divide the world into two. They are carefully driving a wedge through the ‘grayzone’ or the middle ground. This wedge is quickly polarizing the world into Muslim vs. Everyone else. That is their objective. And now that the US is sending group troops, they are now even closer to achieving their goals. Expect more and more people to join Islamic State to take revenge for what the US has done in the region.

This Article (Top US Intelligence Officer Admits “Senseless Wars” In The Middle East By The US Created ISIS) is free and open source. You have permission to republish this article under a Creative Commons license with attribution to the author and AnonHQ.com