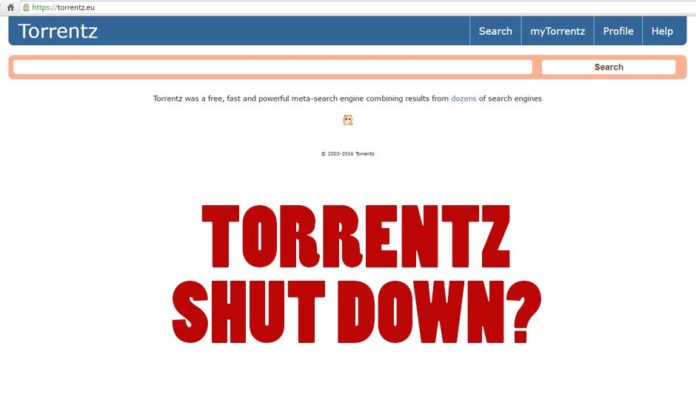 The KickAss Torrents shut down following the arrest of its founder Artem Vaulin in Poland has claimed its first victim: on August 5, one of the world’s largest torrent sites Torrentz.eu announced an emotional “farewell” to its millions of users after more than 13 years of service.

When you open the homepage, you get this message: “Torrentz was a free, fast and powerful meta-search engine combining results from dozens of search engines.”

When you try to search a torrent, you get this message: “Torrentz will always love you. Farewell. ”

Torrentz.eu, launched in July 2003, was the Internet’s biggest meta-search engine for torrents where users could download their favorite TV shows and movies, anti-virus or networking software, without paying for it. An alternative to KickAss Torrents, Torrentz.eu did not actually host any files but it helped users find files located in other torrent sites such as The Pirate Bay, KickAss Torrents, and ExtraTorrent. So if a particular torrent went down, Torrentz.eu would still show you link to more trackers; in fact the meta-search engine witnessed a significant amount of traffic after KickAss Torrents was pulled down.

Two weeks ago, Artem Vaulin, the alleged 30-year-old Ukrainian owner of KickAss Torrents, was detained in Poland after being charged with a four-count US criminal indictment, money laundering and violations of several copyright laws. After the Torrentz.eu shut down, the questions on everyone’s mind now are: Whether any new torrent websites will follow suit and shut down their operations? How will Torrentz’s millions of followers access the copyrighted material now? Will the Internet be the same again?

With Torrentz.eu and KickAssTorrents both shutting down, the torrent community lost two of the largest sites in a period of three weeks. Were you prepared for it? Twitter wasn’t…

The fear is real now. Thought maybe all this would never stop even after the #kickasstorrents incident.But this changes everything #Torrentz

Rest in Peace #Torrents and #KickassTorrents. 2016 has been a hard year on the internet ! ???

It’s been a long day without you, my friend
And I’ll tell you all about it when I see you again #Torrentz

When u find #Torrentz has shut down.. pic.twitter.com/wd1ksufAXr

This article (Torrentz.eu, One Of The World’s Largest Torrent Sites, Mysteriously Shuts Down) is free and open source. You have permission to republish this article under a Creative Commons license with attribution to the author and AnonHQ.com.