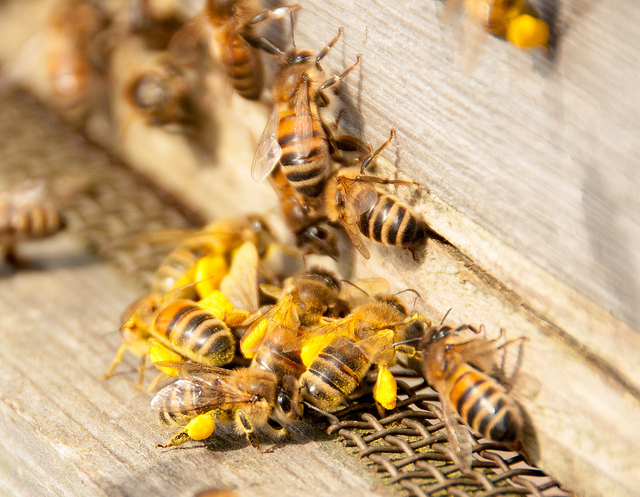 Two of the world’s most widely used insecticides have been show to significantly reduce the bees’ ability to reproduce, a new study suggests.

The study, published in Proceedings of the Royal Society B, found that living sperm in male honeybees was reduced by almost 40 percent when exposed to thiamethoxam and clothianidin, two chemicals from the neonicotinoid family of insecticides.

“We’ve been able to show for the first time that neonicotinoid pesticides are capable of having an effect on the male reproductive system,” said Lars Straub, lead author of the study.

As part of the study, the researchers divided bees into two groups. The first group was fed pollen treated with thiamethoxam and clothianidin, while the second was fed ‘clean food’. After a period of 38 days, the researchers examined the test objects and their semen.

The study found that when exposed to the insecticides, the drones – a male bee that is the product of an unfertilized egg – produced 39 percent less sperm than those that were not exposed to the substances. Although the bees’ reproductive function wasn’t entirely broken off, the researchers noted that the queen had more difficulty conceiving from the drones that had lost some of their virile strength.

“We did observe a significant negative effect on sperm viability, which in turn resulted in a significant reduction in the number of living sperm produced by neonicotinoid drones.

“This could have severe consequences for colony fitness, as well as reduce overall genetic variation within honeybee populations,” the researchers concluded.

In comparison, the female bees involved in the study did not exhibit any changes in fertility.

In addition to the fertility changes noted within the bees that had been exposed to thiamethoxam and clothianidin, the scientists noted a significant change in the bees’ lifespan. The study found that the exposed drones lived for 15 days, compared to 22 days for the controls.

“For the first time, we have demonstrated that frequently employed neonicotinoid insecticides can elicit important lethal and sub-lethal effects on non-target, beneficial male insects; this may have broad population-level implications,” the study concluded.

The scientists say this discovery could provide one explanation for the increasing deaths of honeybees, and other pollinating insects, in recent years. Bees and other insects pollinate roughly three-quarters of the world’s food crops. However, bee populations have been in decline, particularly throughout the northern hemisphere – the loss of flower-rich habitats, disease, pests and the use of pesticides are said to be responsible for the decline.

“There are heaps of different factors that can actually affect colony health,” said Straub. “Pesticides alone are probably just one of the small pieces of the bigger puzzle.”

In 2013, neonicotinoids were banned from use on flowering crops in the EU. The United States has yet to follow the example. An increasing amount of scientific evidence shows that neonicotinoids harm bees. In one study, scientists discovered that neonicotinoids reduce the number of bumblebee queens produced, as well as severely cut the survival and reproduction of honeybee queens.

“Certainly, we already know that insecticide exposure can have an effect on sperm,” said Dennis vanEngelsdorp, an assistant professor at the University of Maryland and specialist on honeybee health. “What we didn’t know is that it was so immediate.”

Since the study’s release, it has been noted that further research surrounding the effects of insecticides on bees is needed in order to determine all the “possible consequences from chronic exposure to pesticides.”

For example, although the colonies used in the experiment were subjected to realistic amounts of the insecticides, scientist are unsure whether both neonicotinoids are commonly consumed together at these levels.

“We now have to go on and take this information and do further field-realistic studies, and also, a main point would be to investigate these interactions that are occurring,” said Straub. “There’s not just one stressor. There’s multiple different stressors acting together.”

This article (Two Widely Used Insecticides Cut Bee Sperm by Almost 40 percent, New Study Suggests) is a free and open source. You have permission to republish this article under a Creative Commons license with attribution to the author and AnonHQ.com.