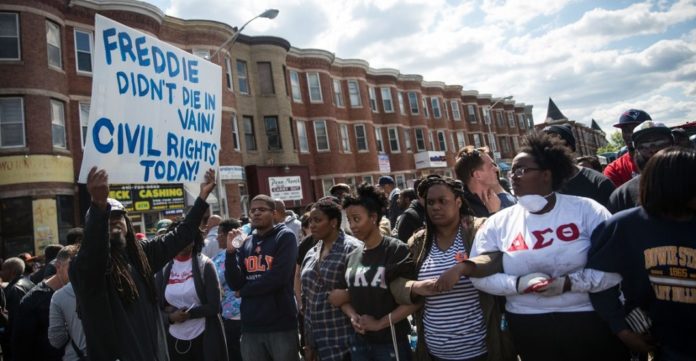 Last month, during the protests in Baltimore over police violence, an infant suddenly stopped breathing and was pronounced deceased. The protests and riots that happened in Baltimore were a tragedy, and to add the death of an infant makes the situation even worse. Baltimore Police did respond quickly, but unfortunately, despite the lifesaving attempts by one officer, the child still passed away. A statement from the police department read, “During the protest this afternoon, Major Richard Gibson was on patrol in the area. He was approached by a group of citizens who informed him that a baby was not breathing inside a restaurant on Greenmount Avenue.” The officer was identified as Major Richard Gibson. Major Gibson was alerted to the emergency situation and was led to a nearby restaurant where the mother had taken the child to feed. Paramedics were notified and Major Gibson performed CPR on the child until the rescue team arrived. The infant was just one month old at the time of the incident. She was taken to a nearby hospital where she passed away. “Police work is often filled with days of highs and lows. Today was one of them that illustrates how your day can change, quickly. In a city where we, sadly, see so much violence, none of us in public safety are immune to the loss of innocent children. …Differences aside- EVERYONE springs in to action, together, at moments notice of a child in a crisis.” These were the words of TJ Smith, the public information officer for the department. The cause of the child’s death is unknown as the coroner’s report has yet to be released. “Let’s pray for the family of the infant who passed, but let’s also pray for our 1st responders and bystanders who witnessed the incident,” Smith posted in a Tweet. This case reminds us that despite th–e onslaught of bad publicity that police have created for themselves, their primary function is to preserve life. This often gets lost in the debate. It is unfortunate that it takes incidents like this to remind us that police aren’t always the bad guy.

This article (Tragedy Strikes – Infant Dies During Baltimore Protests) is a free and open source. You have permission to republish this article under a Creative Commons license with attribution to the author and AnonHQ.com.