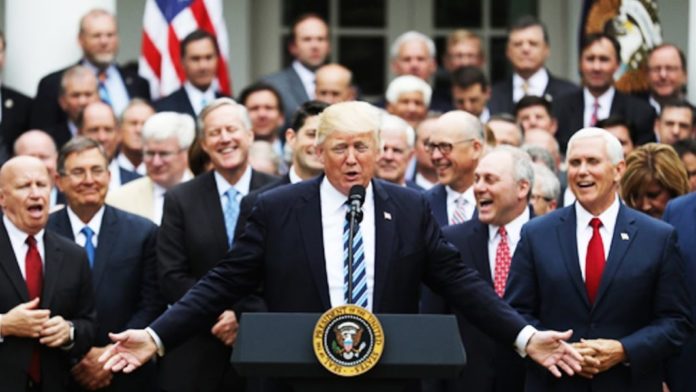 Protests erupted last week after House Republicans passed a healthcare bill that will result in tens of millions of people losing their health insurance, while at the same time providing the rich with a massive tax break, according to reports. The bill also aims to roll back Affordable Care Act (ACA) protections for patients with pre-existing conditions, a move that could inadvertently raise insurance premiums for rape and sexual assault victims.

“Sexual violence survivors face acute treatment needs in the aftermath of an assault such as care for gynecological injuries, other physical trauma, sexually-transmitted diseases, and pregnancy. But sexual violence takes many forms: incest, ongoing sexual abuse outside of the family, sexual assault, sexual harassment or exploitation, and rape. Each of these types of assault puts the survivor at risk for various potential negative physical health and mental health outcomes.”

The numerous news outlets who first reported on the issue chose headlines stating that ‘rape and sexual assault are now a preexisting condition,’ after which other news outlets began trying to debunk the claim. To clarify: no, the new bill does not specifically say that “rape and sexual assault” are preexisting conditions, and headlines should never have been worded that way.

Most states have laws preventing insurance companies from considering sexual assault a pre-existing condition, however the actual concern is that the physical and mental injuries that accompany these type of assaults could be placed in that category under the new bill, and this is true. The GOP’s American Health Care Act (AHCA) aims to roll back private insurance market rules in the ACA that protected citizens with the following ailments (source): Although the House bill doesn’t allow insurance companies to refuse covering those with pre-existing conditions without a waiver, it does allow them to skyrocket premiums should these citizens get a gap in their coverage (this happens a lot more than you may think). Republicans are trying to argue that they aren’t taking your options away from you, meaning when your premiums skyrocket, you won’t be kicked from your insurance policy, but that’s only if you can come up with the money to pay your new premium.

For many, this is the equivalent to saying that no one’s depriving you of your option to buy a mansion. But whether or not you can afford the mansion is a different story.

We would also like to take a moment to remind people that a large majority of individuals, both women and men, don’t report rape or sexual assault. This is not only due to the pain and humiliation accompanied with the experience, but also because many simply don’t believe their attacker would be brought to justice.

The medical conditions that can result from rape or sexual assault are still present whether or not the victim reports it to authorities. If the AHCA aims to exempt certain pre-existing conditions for these victims, that means the victims would have no choice but to report their attack, whether they want to or not. Although reporting such acts of violence may seem the logical conclusion to many, it can sometimes be easier said than done for the victim, and as a result, there will always be those who keep their assault a secret.

Congress is fully aware of the negative outcomes that can result from pulling back protections for those with pre-existing conditions, which is why they had originally tried to exempt themselves from these provisions. Luckily, they won’t be receiving those exemptions, but their attempt at saving their own insurance premiums while throwing the rest of America under-the-bus only highlights their corruption.

Opponents of the AHCA have also brought to attention the massive tax cuts that would go to the wealthiest households in the U.S., “while raising taxes significantly on about 7 million low- and moderate-income families,” according to the Center on Budget and Policy Priorities. Two Medicare taxes that fall on high-income filers would be eliminated:

Additionally, the Congressional Budget Office (CBO) states that if the AHCA is signed into law, around 14 million Americans will be uninsured by next year alone.

The bill still has to pass the Senate, and Republicans have assured the public that changes will be made, however one can’t help but wonder why such protections were rolled back in the first place. How can the same corrupt politicians who wrote the bill be expected to fix it?

This article (‘TrumpCare’ Cuts Taxes for Rich, Potentially Makes Rape-Related Conditions Preexisting) is a free and open source. You have permission to republish this article under a Creative Commons license with attribution to the author and AnonHQ.com.