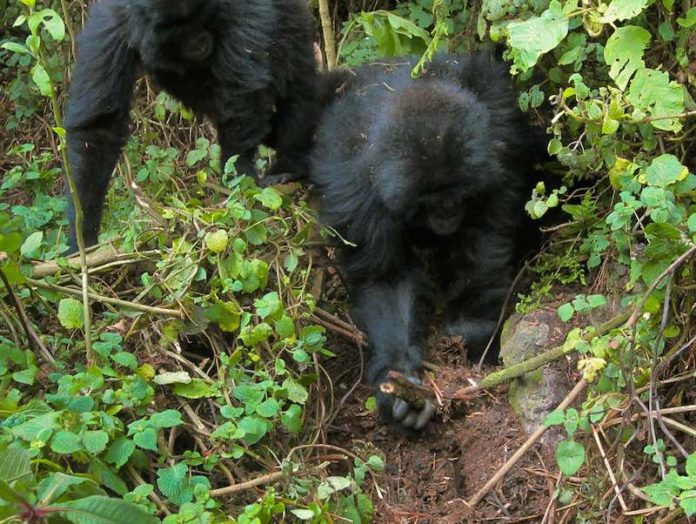 In Rwanda’s Volcanoes National Park, researchers have observed gorillas seeking out and dismantling poacher after an infant in their band was killed by one of the traps.

According to the researchers at the Karisoke Research Centre, this is the first time we have seen mountain gorillas plan and cooperate in such a manner.

“This is absolutely the first time that we’ve seen juveniles doing that … I don’t know of any other reports in the world of juveniles destroying snares,” Veronica Vecellio from the Dian Fossey Gorilla Fund’s Karisoke Research Centre in Rwanda told National Geographic. “We are the largest database and observer of wild gorillas … so I would be very surprised if somebody else has seen that.”

Thousands of these snares are placed around the park by bush hunters attempting to catch antelope and other food sources. However, mountain gorillas and other animals are sometimes caught within the traps. Although the adult gorillas have no difficulty freeing themselves from these snares, younger gorillas are often not strong enough and are simply left to die.

In 1967, when American primatologist Dian Fossey first arrived at the park to study the critically endangered species, only 240 mountain gorilla remained at the park. Habitat loss and human diseases had threatened the gorillas existence at the park.

“They are literally stuck on top of these volcanoes surrounded by a sea of people,” said Tara Stoinski, the president and CEO of Dian Fossey Gorilla Fund International. ” It’s one of the highest human population densities in Africa, so there’s a lot of pressure on the forest and the area that they live.”

Nearly 50 years later, conservation efforts have doubled the gorilla population at the park. However, despite the park’s success, there are just 880 left on the planet. According to the International Fund for Nature (IUCN) the gorillas face “a very high risk of extinction in the wild.”

The two juvenile gorillas that dismantled the snares at Rwanda’s Volcanoes National Park, sprang into action after a tracker spotted a trap very close to the Kuryama gorilla clan. The gorillas—Rwema, a male; and Dukore, a female—warned the ranger to back off and then ran toward the trap.

The traps are made by tying a noose to a branch of bamboo stalk, and bending it down to the ground. The noose is then held in place by another stick or rock before being camouflaged with a sprinkling of vegetation. When a passing animal knocks the stick or rock the branch swings upwards, trapping the prey inside the noose. To dismantle the trap, Rwema jumped on the bent tree branch and broke it, while Dukore freed the noose.

As the tracker and a group of tourists watched in astonishment, the gorillas—now joined by a third gorilla—spotted another snare and ran to dismantle it as well.

Due to the gorillas’ speed and confidence when they destroyed the traps, the researchers believe that this is not the first time these intelligent creatures have outsmarted the hunters.

“They were very confident,” she said. “They saw what they had to do, they did it, and then they left.”

“Chimpanzees are always quoted as being the tool users, but I think, when the situation provides itself, gorillas are quite ingenious,” said Veterinarian Mike Cranfield, executive director of the Mountain Gorilla Veterinary Project.

It is believed that the gorillas learnt how to destroy the traps by watching the Karisoke center’s trackers. You can find out more about the Volcanoes National Park and the conservation work that they do by clicking here to visit their website.

This Article (Two Juvenile Mountain Gorillas Dismantle Hunters’ Trap) is free and open source. You have permission to republish this article under a Creative Commons license with attribution to the author and AnonHQ.com.