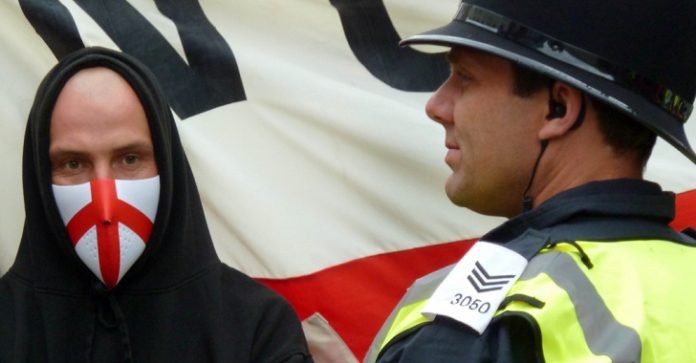 Written by: Michaela Whitton at theantimedia.org

London, UK — On July 4th, British far-right racist groups will be targeting two different places and two different groups in the North and South of England.

In Golders Green, North London, where the Jewish community makes up 20% of the population, an assortment of far-right neo-Nazi groups plans to hold a rally against what has been referred to as the “Jewification of Britain.” They also oppose the Shomrim, a Jewish patrol force that works with the Met police to protect the local Jewish community. These groups are so annoyed about this that they have decided to spend another Saturday antagonizing the Jewish community.

Despite hundreds of members of the public signing a petition calling for the Home Secretary to ban the inflammatory rally, a loophole in the law means the London police are powerless to do anything about static demonstrations—regardless of content.

In what appears to be a case of my enemy is your enemy, therefore we are friends, the rally being held in the wake of April’s rather pathetic demo in Stamford Hill appears to have united people who would not normally mix—namely, a mixed bunch of far-right loons with one thing in common: racism.

On the same day, if you head up north, you can witness another one of the jewels in our British crown by watching members of the ailing English Defence League (EDL) in action in Sheffield. Plans are afoot for a demonstration in the city as the group takes to the streets in protest of Sheffield police’s failure to act during the notorious grooming scandals, which have seen South Yorkshire Police accused of failing to act in cases of child exploitation and grooming by gangs. The EDL claim the failure to act was due to “racial and religious” sensitivities and “political correctness” and this has made them very angry, indeed.

No one can deny the horrendous child exploitation and abuse involved in these cases, where up to 1,400 children were said to be exploited over a 16-year period. This came alongside allegations of police treating the victims with contempt. If you can stomach reading them, some of the comments and posts on the EDL Facebook page might lead one to believe that July’s demonstration is being used as just another vehicle for racial hatred.

Despite decades of multi-culturalism in the UK and British society being more diverse than ever before, it seems as if we are moving backwards. What used to be considered fringe has become more mainstream. A clear example of this is the prolific far-right group, Britain First, whose Facebook page has 745K followers. Over the last few years, social media platforms have been widely used to recruit, organize and perpetuate hateful anti-Muslim agendas.

Police in London are considering taking action over a website promoting the neo-Nazi hate rally in Golders Green. It is a disappointing consolation prize for locals considering the rally itself will go ahead.

Both July 4th demonstrations will be attended by counter protestors and anti-fascists attempting  to drown out ever increasing racism in the UK.