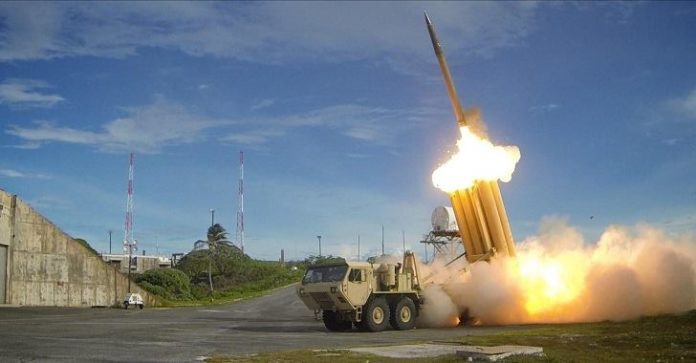 South Korea — On Tuesday, over continued objections from both Russia and China, the first parts of a Terminal High Altitude Area Defense (THAAD) system built and supplied by the United States arrived in South Korea.

From a Reuters report:

Using the launch as further justification for the controversial THAAD deployment  (certain other superpowers aren’t crazy about the idea), U.S. Pacific Commander Admiral Harry Harris said in a statement:

“Continued provocative actions by North Korea, to include yesterday’s launch of multiple missiles, only confirm the prudence of our alliance decision last year to deploy THAAD to South Korea.”

Last week, the U.S. and ally South Korea began conducting their annual joint military drills, and, per usual, North Korea voiced its disapproval and promised to retaliate if it ever felt threatened. This time, however, the country took it a step further.

On Monday, the North Korean military fired four missiles that landed in the sea off the northwest coast of Japan, another U.S. ally.

This was followed up by a statement made in the state-run Korean Central News Agency (KCNA) that said there was a “burning desire” in soldiers “to mercilessly retaliate against the warmongers,” and that Kim Jong Un ordered the missiles to be fired because of the “grim situation in which an actual war may break out at any time.”

It also said the leader wants his army to “get fully ready to promptly move, take positions and strike so that it can open fire to annihilate the enemies.”

Whether this is simply more tough talk from a country known for tough talk and little action, or whether North Korea genuinely feels threatened by the THAAD deployment, matters little. The United States is unloading the equipment regardless.

They are doing so, apparently, regardless of how other global powers might respond to the deployment. Both Russia and China have long had concerns over the THAAD deployment, considering it little more than a pretense for the U.S. to strengthen its foothold in the region. Tuesday’s reactions from those nations were more of the same.

“The consequences of this are on the shoulders of the United States and South Korea,” said Geng Shuang, China’s Foreign Ministry spokesman. “We again strongly urge the relevant sides to stop the deployment process and not keep going down the wrong path.”

Victor Ozerov, speaking for Russia’s Foreign Ministry on Tuesday, called the move “yet another threat against Russia” and claimed that “under the guise of a North Korean threat, they want if not to close the ring around Russia, then at least to besiege it from the west and the east.”

South Korea’s Yonhap News Agency estimates the THAAD system could be operational in as little as two months.