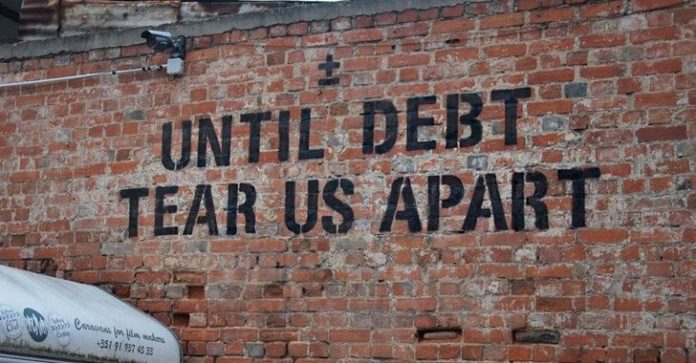 by Shaun Bradley at theantimedia.org

As the vulture pundits in the mainstream media pick apart hollow political scandals, the essential bankruptcy of the federal government looms just ahead. The national debt is creeping toward 20 trillion dollars, and the United State’s largest problem is once again staring the world in the face.

Just before the government was slated to shut down in 2015 (as it did in 2013), Congress was able to pass a delay on the debt ceiling decision until March 15th of this year — Wednesday of this week. Recurring uncertainty caused by events like this has implications that extend far beyond our own borders. The amount of leverage in the current system has already forced foreign holders of U.S. debt to question the real value of America’s full faith and credit.

2016 was a record-setting year for the liquidation of foreign-held U.S. bonds, topping out at nearly $405 billion. The selling was led by China, America’s second-biggest creditor, which currently holds over $1 trillion of U.S. debt, almost 28% of the total held by foreign central banks. They weren’t alone, though, and even the U.S.’ number one lender, Japan, has rolled back their positions to protect themselves as the reality of U.S. insolvency comes into focus. A gradual change has been set in motion, and the global superpower status of the United States may be systematically eroded — not militarily, but economically.

If the government does shut down again, the Treasury Department reportedly has as little as $66 billion in reserves and just enough income from taxes to meet its essential obligations. Entitlements like social security and Medicare will likely be unaffected, but if lawmakers can’t collaborate to pass some kind of resolution, the power to allocate additional federal spending will largely be turned over to President Trump. The initial hiring freeze on federal employees that was implemented shortly after his inauguration could be just a taste of what’s to come. The president’s promised tax cuts, Obamacare “reform,” and increased military spending will only intensify the political rift in this country. Democratic leaders have already accused the Trump administration of colluding with Russia, so it’s likely they’ll refuse to compromise on the budget in an effort to further undermine the Republican agenda. The destructive results of a polarized two-party system are exposed whenever crucial decisions like this must be made. When the legislative branch fails in its duties, the odds of a dictatorial executive developing are always amplified. The coming budgetary stalemate also threatens to undermine the recent record highs seen in the stock market.

Although the financial markets have enjoyed massive gains since the election, many investors have been hypnotized into blindly embracing the illusion that ‘this time it’s different.’ Nearly a decade of emergency monetary policy by the Federal Reserve to lower interest rates, along with its injection of trillions of dollars into the economy, has numbed Wall Street to the harsh realities of history.

“What I’m saying is, all the extra growth from dynamic accounting that you could get if you got all these tax cuts through, it will not happen, the math isn’t there, it’s impossible. There is going to be a debt crisis this summer that will cause a financial crash of unbelievable proportions….It’s going to go on for days and weeks if not months, because Congress is already nasty and partisan. I’m seeing reality, the robo-machines are simply trading sound bites and tweets and hourly sentiments, this is meaningless. This is the biggest suckers rally in history and there is going to be a huge surprise very soon.”

This plague of short-term thinking and desire for instant gratification has lulled America into an apathetic fog. People no longer act as though they have a stake in the future. They choose willful ignorance even as the most serious problems go unresolved. The $20 trillion balance on the national credit card is the most tangible example of how nearly a century of decadence can transform a society. This country once represented the world’s moral compass and a beacon of economic freedom, but those pillars have been abandoned to indulge in war profiteering and monetary fraud.

Delaying the inevitable has become an American pastime, along with avoiding responsibility for the consequences of our actions. The easy way out everyone appears to be looking for doesn’t exist, and the assumption that some enlightened person out there in a position of power has their best interests at heart is a fantasy.

Sure, 20 trillion is just a number, and the United States has a printing press, so technically, it can just create money to pay its bills. But that kind of short-sightedness is what has brought great civilizations to their knees in the past. Millennials can blame the baby boomers and the baby boomers can claim they didn’t know any better, but regardless, the situation is dire.

Despite the anticipation of reaching these debt levels, in all likelihood, the ceiling will eventually be raised and more reckless spending will follow. The spectacle put on by bureaucrats in Washington may be entertaining, but history will judge those who remain silent and pretend it isn’t their responsibility to intervene.

The time to think about who has been entrusted with your life savings and retirement is now. Most people wander through life never considering the unpleasant truths that might disturb their rose-colored view of the world. By acknowledging the reality of the situation, individuals can finally take the first steps towards securing peace of mind for themselves and their families. The United States federal government is not a benevolent caretaker, but a leech that will use its citizens as a host to keep itself alive.

As mainstream pundits and elected officials inevitably shift blame around like a twisted version of musical chairs, remember that self-reliance is the only solution. Those who become dependent on this crumbling house of cards are doomed to suffer the same fate as those seen waiting in lines for government handouts in places like Venezuela. Celebrate the $20 trillion dollar debt by breaking from the old system and exploring the new economy built on peer-to-peer networks, where individual skills are worth more than empty promises made by the State.