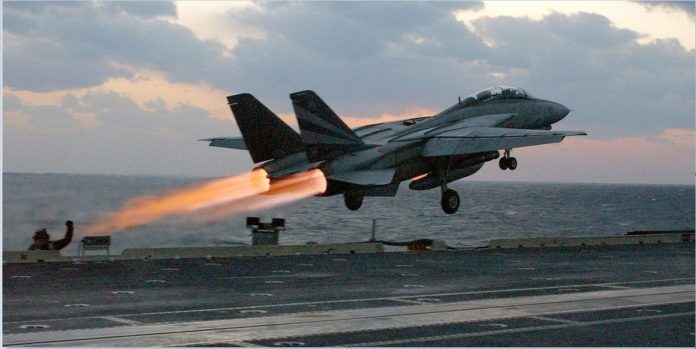 In a groundbreaking discovery, scientists at the United States Naval Research Laboratory (NRL) have successfully developed and demonstrated a revolutionary technology to extract carbon dioxide (CO2) and produce hydrogen (H2) from seawater, subsequently converting the two gasses into hydrocarbon liquid fuel. This fuel can power a jet engine without generating harmful byproducts. “A ship’s ability to produce a significant fraction of the battle group’s fuel for operations at sea could reduce the mean time between refueling, and increase the operational flexibility and time on station. Reducing the logistics tail on fuel delivery, with the potential to increase the Navy’s energy security and independence – with minimal impact on the environment – were key factors in the development of this program.”

The laboratory has already used the new fuel to fly a radio-controlled scale-model replica of a World War II aircraft having an internal combustion engine. The video below shows the R/C P-51 flight:

Refueling U.S. Navy vessels at sea and underway, reveals NRL, is a costly endeavor in terms of logistics, time, fiscal constraints and threats to national security and sailors at sea. In the 2011 fiscal year, the U.S. Navy Military Sea Lift Command – the primary supplier of fuel and oil to the U.S. Navy fleet – delivered nearly 600 million gallons of fuel to Navy vessels underway.

“The potential payoff is the ability to produce JP-5 fuel stock at sea reducing the logistics tail on fuel delivery with no environmental burden and increasing the Navy’s energy security and independence,” noted Dr. Heather Willauer, the principal investigator for the U.S. Naval Research Laboratory, who has spent nearly a decade on the project.

According to the NRL press release, the scientists developed a two-step process in the laboratory to convert the CO2 and H2 gathered from the seawater to liquid hydrocarbons. The process goes something like this:

In the first step, an iron-based catalyst has been developed that can achieve CO2 conversion levels up to 60 percent and decrease unwanted methane production from 97 percent to 25 percent in favor of longer-chain unsaturated hydrocarbons (olefins).

In the second step these olefins can be oligomerized (a chemical process that converts monomers, molecules of low molecular weight, to a compound of higher molecular weight by a finite degree of polymerization) into a liquid containing hydrocarbon molecules in the carbon C9-C16 range, suitable for conversion to jet fuel by a nickel-supported catalyst reaction. Currently, most of the U.S. Navy’s vessels rely entirely on oil-based fuel, with the exception of some aircraft carriers and submarines that rely on nuclear propulsion, reports Business Insider. The development of a hydrocarbon liquid fuel from seawater can relieve the Navy from fuel shortages and fluctuations in price. Vice Admiral Philip Cullom added:

“It’s a huge milestone for us. We are in very challenging times where we really do have to think in pretty innovative ways to look at how we create energy, how we value energy and how we consume it. We need to challenge the results of the assumptions that are the result of the last six decades of constant access to cheap, unlimited amounts of fuel.

“For us in the military, in the Navy, we have some pretty unusual and different kinds of challenges. We don’t necessarily go to a gas station to get our fuel. Our gas station comes to us in terms of an oiler, a replenishment ship. Developing a game-changing technology like this, seawater to fuel, really is something that reinvents a lot of the way we can do business when you think about logistics, readiness.”

The process is extremely energy intensive at the moment. Defense One writes that it takes twice as much electricity to convert the water into fuel components as the process yields in terms of power.  At current energy pricing, the cost of producing fuel from seawater is between $3 and $6 per gallon, but Dr Willauer believes the new fuel could be commercially viable in less than 10 years.

In a 2012 analysis published in the Journal of Renewable and Sustainable Energy, Dr Willauer and her colleagues forecast that though the cost seems slightly more expensive than what the Navy has been paying for fuel, it may not be for long. The scientists observed:

“In nine years, the price of fuel for the Navy could be well over the price of producing a synthetic jet fuel at sea which would not incur the costs associated with logistical storage and delivery… A ship’s ability to produce any significant fraction of the battle group’s fuel for operations would increase the Navy’s operational flexibility and time on station by increasing the mean time between refueling.”

Navy’s new jet fuel: Seawater? http://t.co/5Ka0AbrUVR what potential! Not only would it decrease dependence on fossils it also depletes CO2

This article (US Navy Turns Seawater into Jet Fuel, Flies Aircraft Using Ocean’s CO2 and H2) is a free and open source. You have permission to republish this article under a Creative Commons license with attribution to the author and AnonHQ.com.