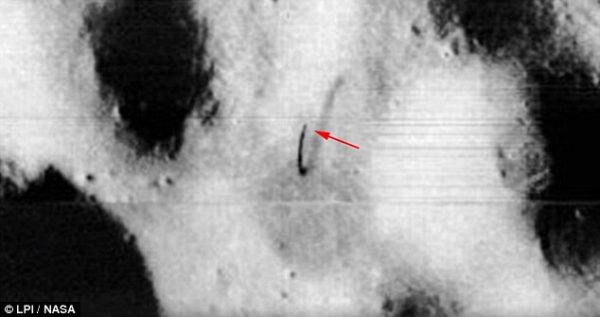 An unidentified Flying Object (UFO) researcher in Finland has published a strange image he spotted on the surface of the moon, looking like an antenna.

Mark Sawalha said he spotted the ‘strange spike’ in a photo taken by the American National Aeronautics and Space Administration (NASA), during a mission to map the image of the moon.

Since the image appeared online, unnamed NASA officials have admitted that their unmanned Lunar Orbiter captured something that appears to show a small dark ‘spike’ casting a shadow. This admission by the officials has further fueled speculations about the old conspiracy theories surrounding UFOs. Mr Sawalha said he believed the strange antenna could be located on the roof of an alien base, and that this is not new to NASA researchers.

Alien life does not originate from the Earth. Some cosmologists have said alien life ranges from simple bacteria-like organisms to civilizations, which are far considered more advanced than that of human beings.

Since the mid-20th century, there has been a significant surge in the search for signs of alien intelligence by researchers. Radios have been deployed to detect possible extraterrestrial signals; telescopes have also been mounted to search for potentially habitable extra solar planets. The famous British Theoretical Physicist, Professor Stephen Hawking has said in the past, that alien life is real.

Mr Sawalha told the Sun in an interview that NASA has spotted many strange objects on the surface of the moon, but has deliberately kept the public in the dark. He said that “aliens are using moon minerals and they have bases there too. Many other findings support this theory.”

Sawalha further revealed that the presence of aliens on the lunar surface may explain NASA’s reluctance to send manned spacecraft to the moon, since the Apollo mission 11 program. The Apollo 11 program was the third United States human spaceflight program carried out by NASA, which accomplished landing the first people on the Moon, from 1969 to 1972.

According to Sawalha, what he spotted in the images is new to him, and that he is sure the object was placed on the surface of the moon by aliens.

“Finding Alien anomalies (mechanical structures, buildings, etc) on our solar system is quite [a] new matter for me. I got interested about this topic after I found these strange structures on NASA images myself. I am sure that these findings are real. We have still a lot to learn from our neighbor planets and what is happening there,” he wrote on his personal website.

However, as Sawalha is confident that the image he has spotted belongs to aliens, UFO skeptics have dismissed his claim. Author of the UFO Investigations Manual, Nigel Watson told MailOnline in an interview that the perceived alien antenna is nothing more than an optical illusion. He said: “In this case the vertical looking hill is more likely to be caused by shadows from a hill that has a steep bank or cliff face on the right-hand-side. There are plenty of alternative explanations that don’t involve the intervention of aliens, but enthusiasts are always eager to leap on anything unusual and build them into their extraterrestrial fantasies.” This is not the first time a strange object has been spotted in images taken from the surface of the moon. In the past, a YouTube user named MexicoGeek, spotted a 5.6km high structure (spire) in images from Google Moon. This fueled speculations of the object being a possible ‘launch pad’ that was constructed by aliens. MexicoGeek reportedly used Google Moon to zoom in on an area of the lunar surface between the Rupes Liebig and Rimae Marsenius craters. UFO Sightings Daily, a UFO conspiracy website, reported then, that the spire was probably built to accommodate a very large vessel belonging to aliens, so that it could dock safely without landing.

This article (UFO Hunter Discovers ‘Alien Base’ on the Moon, Claims NASA knows about it [Photos]) is a free and open source. You have permission to republish this article under a Creative Commons license with attribution to the author and AnonHQ.com.