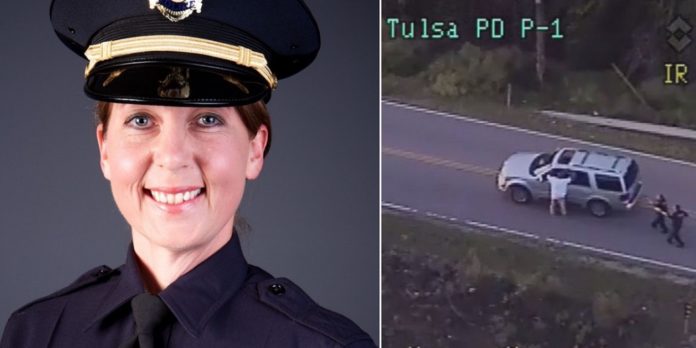 Tulsa District Attorney Steve Kunzweiller informed the world today, that police officer Betty Shelby has been charged with first degree manslaughter in the death of Terence Crutcher. Crutcher was broken down in the middle of an Oklahoma road when Ofc. Shelby rolled up on him. Within minutes, she shot him dead. Multiple videos were released right away, showing Crutcher with his hands up throughout most of the encounter. The evidence on the video was enough to charge Shelby, who currently has a felony warrant issued for her arrest.

Shelby has been contacted and arrangements have been made for her surrender. The arrest most likely comes as little comfort to the family of Terrance Crutcher, who lost a loved one last Friday. With awareness of police misconduct and brutality virtually everywhere at this point, it is shocking to see officers not demonstrating any awareness – that their actions will shape public perception. Officer Shelby claimed that Crutcher was reaching into his vehicle at the time of the shooting, however, the vehicle presented by the family’s lawyer directly contradicts these statements, clearly showing the window was up at the time of the shooting. It is questionable if Shelby will be charged with any form of perjury, as her statements were most certainly in a court documented capacity.

With so many shootings by police these days, it’s hard to keep up. We have yet to see a resolution to the shooting deaths of Philando Castile, or Anton Sterling. The fact that the Tulsa District Attorney charged Shelby within several days of the event, speaks to the efficiency at which an internal investigation by police and by state investigators can be done. There is no excuse for there to have been no new developments in the previously mentioned shootings. The fact that Shelby was charged with manslaughter instead of murder in the second degree, also speaks to how serious the district attorney is about prosecution. A charge of murder would carry a much heavier burden and would risk a winning outcome. The fact that the officer was charged with the harder to defend manslaughter charge, shows that DA Kunzweiller wants Shelby behind bars.

Not only Americans, but people from around the world, are tired of the killings, whether “justified” or not. Attitudes toward police aren’t getting any better. The public’s outrage should dictate an overhaul of the entire police system in America, yet those in charge drag their feet as though there wasn’t a problem. With the charge and inevitable arrest of Officer Betty Shelby on the books, it is only a matter of time before we find ourselves right here once again. We can only hope that those in charge know the world is watching, and that they can’t halt the winds of change forever.

This article (Tulsa Cop Betty Shelby Charged with Manslaughter in Death of Terrance Crutcher) is a free and open source. You have permission to republish this article under a Creative Commons license with attribution to the author and AnonHQ.com.