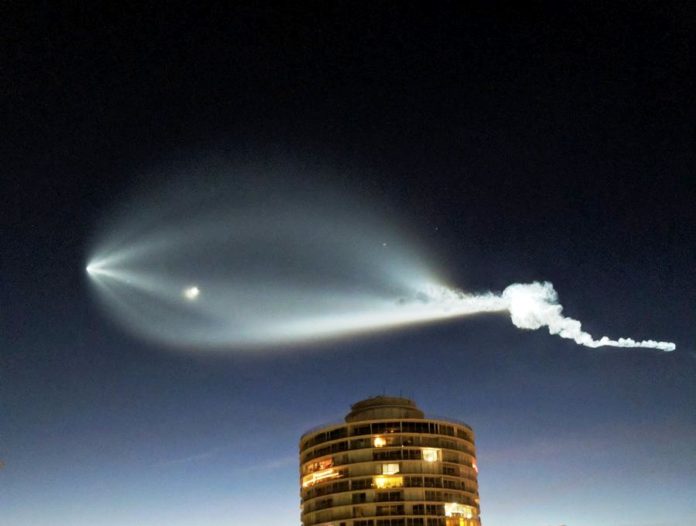 At around sunset, almost everyone in LA had their phones capturing a beautiful sight of a rocket flight; the sight was a show stopper and sparked both curiosity and alarm amongst the residents of California.

The rocket, which created a cloud of luminous mist in LA’s amethyst night sky, was a Space X’s Falcon 9 that took off from the Vandenberg Air Force Base at 15:27. Falcon 9 had 10 Iridium-4 satellites on-board that were released in a low-Earth orbit.

The satellites will be a part of an operation controlled by Iridium Communications to create faster communication and also provide a safer flight monitoring system. The same rocket was used for the same mission in June as well. The Falcon 9 was visible in southern California and parts of Arizona.  A lot of people were seen taking pictures of the amazing streaks of light in the dark sky. The sight was so intriguing that people of LA thought it was a UFO. Many of them went on saying that it was a nuclear bomb from North Korea.

Wtf is flying through the sky in Hollywood #aliens pic.twitter.com/mC693ELEZx

I have no idea what this was but everyone including me in Woodland Hills, CA pulled over to the side of the road to take pictures and video and to discuss whether we just saw a UFO or not.This is the video I shot of the aftermath of what were a lot of lights and smoke in the sky. pic.twitter.com/pqLi9FCMNH