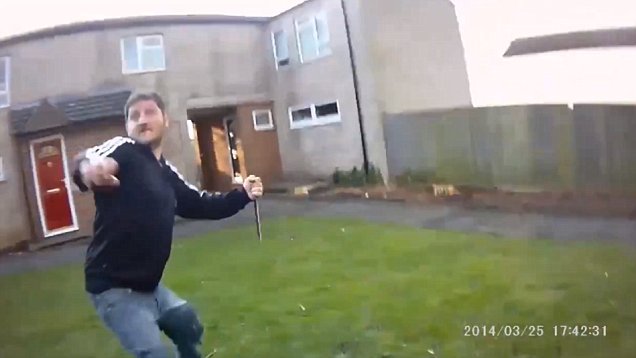 A video of a man using an 8-inch blade to threaten police officers has recently been released to the public. The video, which was first recorded in 2014, shows a man in the UK shouting aggressively towards two police officers and swinging his blade around in the air.

The footage of the incident was released only a couple of weeks ago and has already gone viral on many sites such as Youtube and Facebook. The two officers, Alex Prentice and Debbie Wishart, were called to take care of a domestic incident in Northamptonshire and were greeted by a very aggressive suspect, Lee Vickers. Prentice is heard shouting “Put down the knife!” towards the suspect whilst requesting his partner to use pepper spray. The two officers kept on backing away, however one of the officer’s protective vests were slashed by the knife, luckily, there was no injury.

Vickers later backed down and began to diverge from the two officers but was then caught and sentenced to 42 months in prison.

Those of the Northamptonshire police department congratulated the two officers, saying that “They both demonstrated courage, cool resilience and outstanding professionalism in the face of extreme danger.”

This has caused many debates on what would have happened if it was two US cops in combat with the criminal. Many individuals are now stating that these officers are showing what the US cops are lacking. – Courage, training, ease of quick thanking and correct equipment.

Many arguments have now been taken to sites like Facebook regarding the subject; one man wrote “This is why I feel safe living in the UK,”  going on to say “Because normal police officers don’t have guns and they know how to do their jobs. Compared to American police officers.”

Some of the other quotes regarding the argument that users wrote on Facebook involve;

“If he was Black or Latino in the US, he would have died and there would have been no remorse,”

“If UK cops had guns this guy would have been shot dead!”

“If a cop tells you to put a knife down, just put it down! Cooperate with the police. People act like policemen wake up every day thinking, ‘I hope I get to shoot someone today.’ Educating people to stop fighting the police will save more lives than taking guns from policemen,”

And “If someone came at you with a knife and you had a gun, wouldn’t you shoot?”

Another thing being shared around is that the UK police serve the people, not the corporates, like in the US.

It is well known that the US police abuse their weapons and power every day, and it is time for a change, in fact, it was in need for a change many years ago, what we have now is a country sized happy go lucky concentration camp. US officers will kill more people in a day than other countries do in a decade and some current statistics provided by The Guardian, state that 59 people have been killed by US officers in the first 24 days of 2015, whilst in England and Wales, only 55 people have been killed by officers in the last 24 years! If those statistics continue then in the next 24 years the US police force would have killed around 21,500 more people than both England and Wales put together… let that sink in.

The video can be seen below.

This Article (UK Cops Disarm And Arrest Knife-Weilding Man) is free and open source. You have permission to republish this article under a Creative Commons license with attribution to the author and AnonHQ.com.