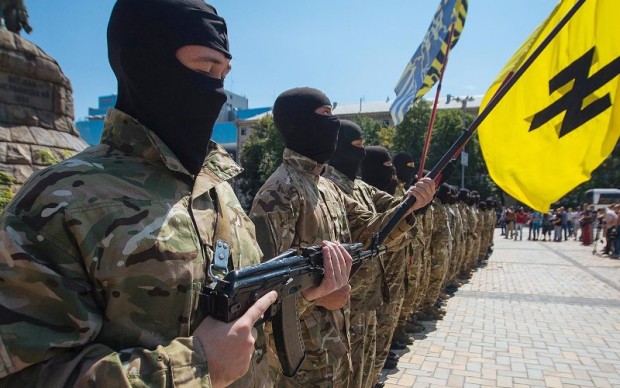 The so called Maidan protesters in Ukraine appeared to have been motivated by anger over political corruption as well as desire of the country’s nationalists to join the European Union (EU).

So long as media framing and propaganda exist in politics, and our governments desire to have their interests over others, majority of the public will be manipulated to believe in lies. The real story would always be hidden in the dark.

Since the conflict began in Ukraine, we have been made to believe that the Maidan protesters are ordinary citizens who want closer ties with the EU than Russia. Some say they want bright opportunities to be able to take their destinies into their own hands. In Western media sphere especially in the US, we have been bombarded with how the Maidan protesters are right and hardly do we hear about the ethnic Russians in the east.

Ukrainian nationalists fought alongside Nazis Germany during World War II. They killed many ethnic Russians in the east as far as Stalingrad in Russian territories. And these same Neo-Nazis made up a significant number and surged to the front during the seizure of government buildings and the climatic clashes with police during the protest.

When Viktor Yanukovych was ousted, the neo-Nazi militias effectively controlled the government but European and US diplomats rushed to help the shaken parliament put together the semblance of a respectable government. But the question is how come at least four ministries, including national security, were awarded to the right-wing extremists in recognition of their crucial role in ousting Yanukovych?

These same extremists who fought alongside Germany and killed many Russians in the eastern border, are today angels in our eyes? We all know that the former national security chief, Andriy Parubiy who founded the Social-National Party of Ukraine in 1991, blending radical Ukrainian nationalism with neo-Nazi symbols was commandant of the Maidan’s “self-defense forces.” But throughout the crisis, the US State Department and mainstream media have downplayed the role of neo-Nazis in the Kiev regime. But is has now emerged that right-wing storm troopers fly neo-Nazi banners as they attack in the east.

The New York Times reported that the Ukrainian government’s offensive against ethnic Russian rebels in the east has unleashed far-right paramilitary militias that have even raised a neo-Nazi banner over the conquered town of Marinka. Other independent articles have substantiated this report.

An article that appeared in the Times by Andrew E. Kramer copiously mentioned the emerging neo-Nazi paramilitary role in the conflict in the following 3 paragraphs.

“The fighting for Donetsk has taken on a lethal pattern: The regular army bombards separatist positions from afar, followed by chaotic, violent assaults by some of the half-dozen or so paramilitary groups surrounding Donetsk who are willing to plunge into urban combat.

“Officials in Kiev say the militias and the army coordinate their actions, but the militias, which count about 7,000 fighters, are angry and, at times, uncontrollable. One known as Azov, which took over the village of Marinka, flies a neo-Nazi symbol resembling a Swastika as its flag.

“In pressing their advance, the fighters took their orders from a local army commander, rather than from Kiev. In the video of the attack, no restraint was evident. Gesturing toward a suspected pro-Russian position, one soldier screamed, ‘The bastards are right there!’ Then he opened fire.”

Although some of these articles are objective, they bury the truth in the end. And that is the media Framing we are talking about. There is enough evidence to tell us that the neo-Nazi problem still exist in Ukraine no matter how our media might frame the situation.