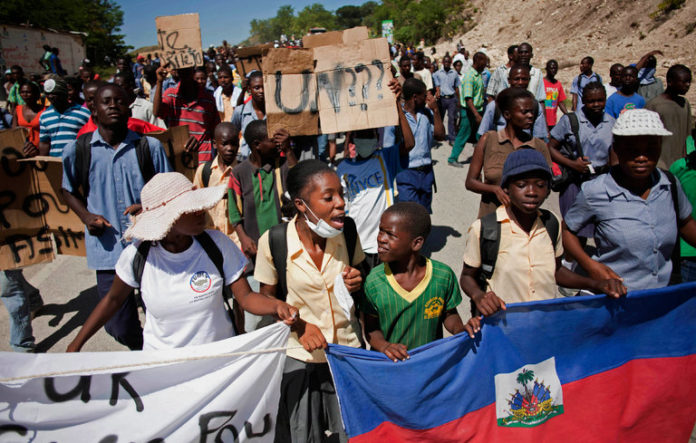 In October 2010, the Haitian Ministry of Public Health announced to the world that Haiti was in the midst of cholera outbreak. This was shocking to the world, as Haiti had not had a case of cholera in over a century. The cholera outbreak left over 10,000 dead and tens of thousands had become sick. After years of denial, the United Nations has come forth, accepting responsibility for the role they played in bringing cholera to the impoverished island nation. The admission by UN Deputy Spokesman Farhan Haq, came after a report heavily criticizing the UN and their role in the cholera outbreak was leaked to the New York Times. The report was commissioned by the UN and drafted by NYU law professor, Philip Alston. According to the report, the cholera epidemic “would not have broken out but for the actions of the United Nations.” While commissioning the report and acknowledging that the UN “has become convinced that it needs to do much more regarding its own involvement in the initial outbreak and the suffering of those affected by cholera” the UN hasn’t fully accepted responsibility yet. They acknowledge that they played a role, but have yet to uphold the findings of the report, which was critical of the organization. Haq stated to the media that they were looking for ways to resolve this. Currently they are trying to decide “how to do the right thing.” The UN appears to be dancing between, admitting they were the cause of the outbreak, while attempting to hide behind the UN’s position of immunity for peacekeepers who act on the UN’s behalf.

The outbreak began on October 18, 2010 and quickly ravaged the small island nation. The outbreak was believed to have been caused by Nepalese UN peacekeepers, who responded to the island to assist with the aftermath of the earthquake that rocked Haiti. Nepal had been hit with its own cholera outbreak shortly before the peacekeepers arrived in Haiti.

In 2011, the families of 5,000 victims of cholera – who lost their lives during the epidemic – filed a petition with the United Nations. The petition demanded the UN address this issue. The response from the legal department was basically, that their claim was invalid. This new report does not paint the UN in a good light, considering they knew about their involvement in the cholera outbreak and intentionally lied and obfuscated the truth surrounding the incident. Despite the dozens of lawsuits and evidence against the UN, they refused to acknowledge any role in the Haiti outbreak. Despite investigators having traced the cholera outbreak to specific UN employees, they had not wanted to accept responsibility for the tragedy that unfolded at their hands. Despite the current revelations regarding the UN-Haiti cholera report, they refuse to change their legal position on the matter. The UN is in a precarious position, all but admitting that it killed 10,000 Haitians, but sticking to their guns over the legal ramifications. Haiti has not fully recovered from this outbreak, with a handful of cases persisting each year.

This article (UN Acknowledges Role in 2010 Haiti Cholera Outbreak) is a free and open source. You have permission to republish this article under a Creative Commons license with attribution to the author and Anonhq.com.