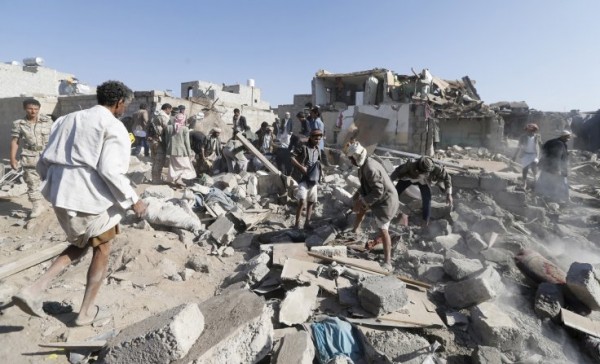 The Houthi rebels, a predominant Shiite were accused by the Kingdom of Saudi Arabia of receiving funding to cause instability in the country from rival regional power, Iran who Saudi considers a major threat to its influence in the region.

The Saudis put together a coalition, backed by the United States to launch an unrelenting aerial bombing campaign. And according to eyewitnesses account, there have been near-daily air raids since the bombing campaign started some seven months ago.

Like Islamic State fighters who have seized parts of Syria and Iraq, and destroying historical artifacts and monuments in Syria, residents of Yemen’s ancient cities have said in the past that the aerial bombardments by the coalition are killing, displacing, and destroying the country’s historical heritage sites. “We left our homes before, but we went back. But this time, our home and half our village was destroyed, for what? They are not just buildings; they’re part of us, the heart of our families for hundreds of years. The Saudis and their American bombs are erasing us from history”, a displaced resident in the historical city of Saada said.

However, these claims by residents have been largely ignored by the Mainstream Media, probably due to the involvement of the US.

But now, the United Nations Educational, Scientific and Cultural Organization (UNESCO), the specialized agency of the United Nations responsible for maintaining peace and security through promotion of international collaboration to advance universal respect for justice, the rule of law, and human rights has said that airstrikes in Yemen in addition to the killings and the displacements of civilians, are also destroying ancient heritage sites. One of the worst affected areas has been Yemen’s northern province of Saada, the birthplace and homeland of the Houthi movement. Saada City, the provincial capital was said to have been founded before fourth century BC as the hub of the Minaean Kingdom of Main. It is also said the city is the place where the first skyscrapers in the world were built.

The Intercept reports that on May 8 this year, the Saudi-led coalition declared Saada City, home to some 50,000 people, a “military zone” and gave civilians few hours notice to leave. Human Rights Watch said then that the declaration was a clear violation of international humanitarian law. Many of those who did not heed the coalition’s warning were forced to flee their homes by the ensuing airstrikes. The village of Rahban, on the outskirts of the city was razed to the ground. It consisted entirely of historic, centuries-old multistory homes with thick rammed-earth walls, rainbow-colored stained-glass windows, and hand-carved wooden doors. Timber joists that supported families for tens of generations now protrude from piles of rubble caused by the airstrike. The historical al-Hadi mosque, where it is believed Prophet Mohammed’s camel once rested was also bombed. The Mosque has since been closed down.

Apart from Saada City, the world-famous Great Marib Dam has also been bombed. The dam which Dates back to the eighth century BC, 50 feet high and 2,100 feet wide, almost twice the width of the Hoover Dam is said to be one of the wonders of the ancient world. It waters the region for 1,000 years. Marib was the capital of the Sabaean Kingdom, ruled by the Biblical Queen of Sheba. In the remote desert of Al-Jawf, more than 100 miles northeast of the capital Sanaa, the country’s most impressive pre-Islamic metropolis, Baraqish reached its zenith in the fifth century BC and remained inhabited up until the 19th century. In August, the imposing 40-foot-high, unbroken stone curtain that had protected the city for some 2,500 years was bombed by the coalition, destroying a section of the ancient wall. Apart from these areas, many other places listed by UNESCO as World Heritage Sites in the country have been completely destroyed.

The Director General of UNESCO, Irina Bokova called the bombing “a senseless destruction of one of the richest cultures in the Arab region.”

According to the United Nation, 5,604 people, including 2,577 civilians have died since the conflict began in March. Observers have said the number is undercounted of the real figure as many of the dead do not reach medical treatment centers, but are buried hurriedly per the Islamic traditions.

This Article (UNESCO Finally Admits US And Saudi Bombs Are Destroying Ancient Heritage Sites In Yemen) is free and open source. You have permission to republish this article under a Creative Commons license with attribution to the author and AnonHQ.com.