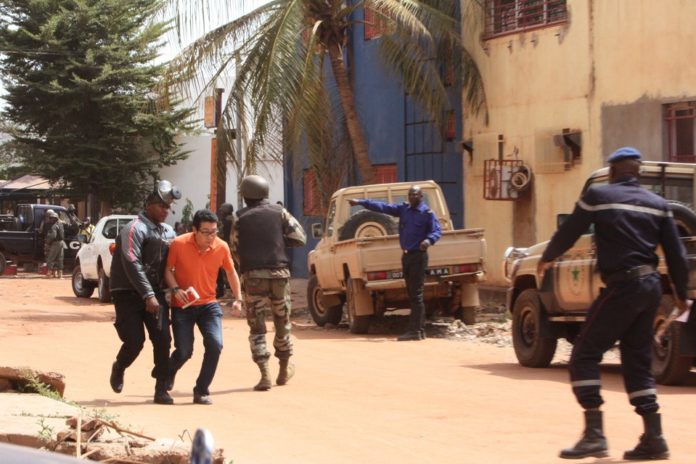 Up to 10 gunmen, said to be shouting “Allahu Akbar” (“God is great” in Arabic), stormed the Radisson Blu hotel in Mali’s capital, Bamako on the morning of November 20 and held hostage 140 guests and 30 hotel staff. Among the hostages are US, French, Turkish, Indian and Chinese citizens. Some reports suggest they include French military, Air France employees and Thales [major electronic systems company working in defense and aerospace] personnel.

Two Malian nationals and a French national have died in the attack on the former French colony, a West African nation where French troops are at war with Al Qaeda militants.

Witnesses said several hostages were released by the attackers after reciting verses from the Quran.

Some of the hostage takers in Mali were speaking English, according to escaped hostages https://t.co/oeKzBzm8ER

“I heard them say in English ‘Did you load it?’, ‘Let’s go’,” said singer Sékouba ‘Bambino’ Diabate, who was freed by #Mali security forces

Despite reports that 80 of the 170 hostages were freed after security forces entered the hotel, the owners of the hotel said 138 people are still in the building. In its latest statement, the Rezidor hotel group said:

We are closely following the hostage-taking incident that is taking place at the Radisson Blu Hotel. According to our latest information 125 guests and 13 employees are still in the building. Our highest concern is the safety of all our guests and employees in the hotel. We are in constant contact with the authorities there and will share further information with you when we have it.

Business owner Garba Konate informed Al Jazeera that a group of attackers carrying AK-47s showed up in vehicles bearing diplomatic licence plates, thereby gaining easy access, about 7 am. “About 10 gunmen arrived early in the morning and shot all the guards in front of the Radisson,” Konate said.

12 Air France crew members were staying in the hotel but the airline said they were safe. Air France has canceled all its flights Friday to and from Bamako as a precaution.

The attack comes just a day after French President Hollande praised his troops for successfully fighting Islamists in the African nation.

Northern Mali fell under the control of Islamist militants in 2012. A French-led offensive ousted them in 2013, but remnants of the group have staged a number of attacks on United Nations peacekeepers and Malian forces. Hundreds of French soldiers remain in the country.

This Article (Jihadists Attack Mali’s Radisson Blu Hotel, Hold 170 Hostage) is free and open source. You have permission to republish this article under a Creative Commons license with attribution to the author and AnonHQ.com.