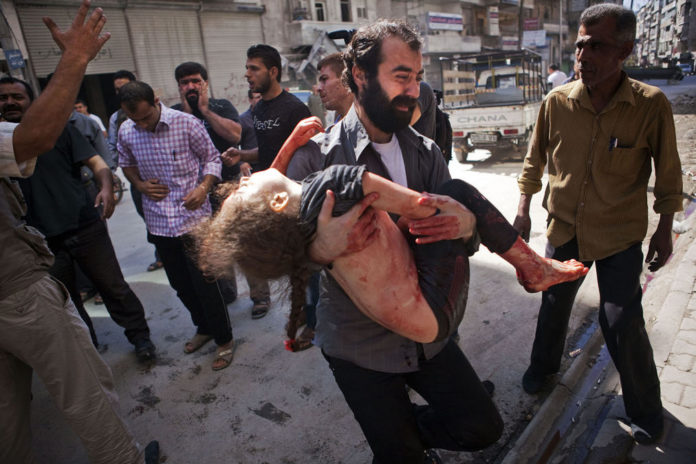 The Pentagon recently confirmed that the United States military has used depleted uranium ammunitions in Syria and Iran, in airstrikes against tankers that belonged to the Islamic State.

The low-quality uranium ammunitions were designed to pierce through thick armour, which is used by ISIS; however, the heavy ammunition has been mocked for posing serious health issues to the civilians living in the area, as well as for the military personnel who used them. Furthermore, many scientists around the world also say that the increased rates of mutation in Iraqi newborns is due to the depleted uranium weapons used by the American military, giving rise to cancer and birth defects in the country.

Experts also gave the illness and the birth defects a term: the ‘Gulf War Syndrome’, a label coined during the 1990’s because of the soaring illnesses suffered by Gulf War veterans.

An organisation known as the Coalition to Ban Uranium Weapons said in an interview with the Washington Post, that they were astonished to hear that the United States military used nuclear weapons in Syria.

The organisation further stated that the Americans were going against their own policy; in the past, the United States regularly stated that the weapons are of anti-armour usage, but the war data from Iraq states otherwise. Meanwhile, the United Nations claims that depleted uranium still falls under the radioactive banner, being more than fifty percent radioactive than that of natural uranium.

However, it was reported that between November 16 and 22, 2015, an A-10 Thunderbolt II used depleted uranium ammunition on tankers carrying oil for Daesh. The operation was successful and destroyed many of those trucks. However, the cost was high, with the targets realizing the force of more than five thousand burning rounds of depleted uranium being fired on and around them.

They’re Making a Mess and They Know It

The United Nation’s Environment Program has been present in the affected Iraqi and Syrian areas, conducting clean-ups and studies on the damage caused by the radioactive material.

Mozhgan Savabieasfahani, who was born during the time of the Iranian Revolution, won the Rachel Carson Prize, awarded to her for her research relating to birth defects caused by using these weapons in Iraq.

Even though the United States says that they only used the radioactive weapons twice, Mozhgan says the American government is lying, and the Pentagon is not telling the whole truth.

This article (US Admits Using Radioactive Weapons in Syria & Iraq, Leaving Thousands of Babies Deformed) is a free and open source. You have permission to republish this article under a Creative Commons license with attribution to the author and AnonHQ.com.