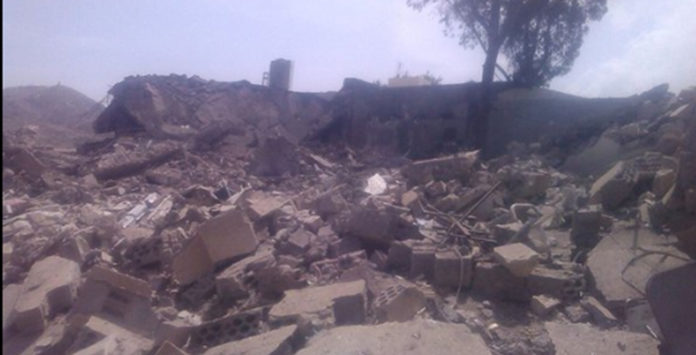 By SM Gibson  at theantimedia.org

A Doctors Without Borders/Medecins Sans Frontieres (MSF) hospital in Yemen was hit by a series of (US and UK Ally) Saudi-led airstrikes on Monday night, the organisation tweeted Tuesday morning. MSF reported that patients and staff were inside the facility when the bombing took place. At least one person was injured and is in stable condition.

MSF spokesman Hassan Boucenine stated the attacks on the hospital in the Yemeni governorate of Saada “must have been deliberate,” as it was only two weeks ago that the group provided the coordinates for their Saada location to the Saudi-led coalition.

“We give GPS positions, all the positions, of our hospital to the coalition head and we renew them every month,” he said, adding that “the latest one was done two week [sic] ago.”

Boucenine said it is inconceivable that the military didn’t “know it [was] an MSF hospital.” The spokesman went on to add that “There is no reason – ever – to commit a war crime. To target a hospital. There cannot be any good reason.”

The attack comes less than one month after a Doctors Without Borders facility located in Kunduz, northern Afghanistan was attacked by a U.S. military airstrike. At least 30 people were killed.

The airstrikes also mark the one week anniversary of the U.S. Department of Defense (DoD) announcing it approved an $11.25 billion deal to sell combat ships to Saudi Arabia.

.@MSF facility in #Saada #Yemen was hit by several airstrikes last night with patients & staff inside the facility. pic.twitter.com/MicfUT571V

.@MSF first photos for its health facility in Haydan #Saada after the airstrikes that took place last night. #Yemen pic.twitter.com/PUFEF0Yiq5

This article (US Ally Bombs ANOTHER Doctors Without Borders Hospital) is free and open source. You have permission to republish this article under a Creative Commons license with attribution to SM Gibson and theAntiMedia.org. Anti-Media Radio airs weeknights at 11pm Eastern/8pm Pacific. If you spot a typo, email [email protected].