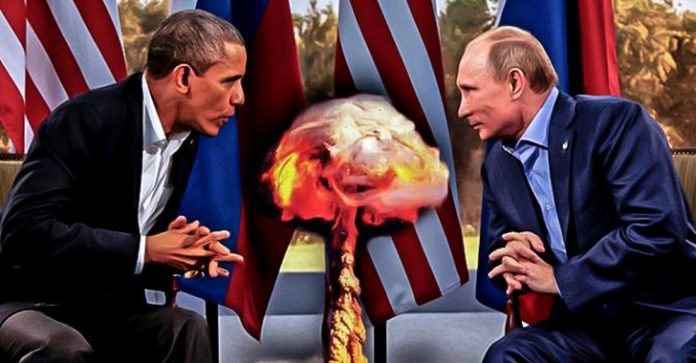 As hawkish as presidential frontrunner Hillary Clinton may be, the fact the Obama administration ispressing for direct war in Syria before she even has a chance to be elected raises serious questions about the urgency underpinning the U.S. establishment’s push to unseat Syrian president Bashar al-Assad from power.

Just this week, Russia deployed its S-300 surface-to-air missiles to Syria’s western coast in a move to preemptively counter any threat from U.S.-coalition airstrikes. The move came shortly after a number of reports surfaced in the corporate media claiming the Obama administration was mulling over attacking Syrian troops directly.

The U.S. coalition targeted Syrian troops as recently as September of this year in an attack which, according to Assadhimself, lasted for over an hour. At least 80 soldiers were killed while another 100 or so were injured. An ISIS advance followed almost immediately.

No apologies or compensation were offered, and the U.S. barely seemed to flinch at the idea of 80 soldiers (who were battling ISIS militants) losing their lives as a result of their air strikes. The implication of this recent attack is that the U.S. will have no problem launching a similar offensive in the near future.

However, Russia has presented an issue for the sane members of the military-industrial complex because it has become increasingly clear the U.S. cannot intervene in Syria without dealing with Russia first. To date, the American government may have been playing a game of chicken with Russia to see what it might take for them to abandon the Syrian regime. However, if anything, Russia’s involvement in the Syrian conflict has only increased in recent years, and that doesn’t appear to be changing anytime soon.

In tandem with the deployment of the S-300 missiles, Russian General Igor Konashenkov made it clear in a statementthat “any missile or airstrikes on the territory controlled by the Syrian government will create a clear threat to Russian servicemen” and could be shot down by the S-300 defense system.

Given that the U.S. coalition is the only air force that poses a threat to the Syrian regime (the various terror networks in Syria don’t have an air force – at least not officially), the statement is clearly intended as a warning to their American counterparts.

Russian Foreign Minister Sergei Lavrov, a mastermind of diplomacy, softened the tone of Konashenkov’s words by stating the missile systems were purely defensive and posed no threats to anyone. Most notable, however, was the fact Lavrov said this in a press conference with French Foreign Minister Jean-Marc Ayrault (France is a staunch advocate of removing Assad, meaning Lavrov was essentially meeting with one of his biggest opponents in Syria).

Russia’s threats, whether sugar-coated or not, are more than an attempt to talk tough on the international stage. The Russian government is evidently taking this potential war seriously; it began emergency response exercises on Tuesday that included the participation of both government officials and citizens, according to the Russian government (it’s worth noting the details of this exercise were arguably exaggerated by Western media).

The United States, on the other hand, continues to play a dangerous game in pushing this war further than it needs to. The United States-led coalition has no legal basis to be operating militarily in Syria, whether through their own domestic legislative institutions or through the United Nations. Russian assistance was requested formally by the Assad regime, which currently holds the seat at the U.N. This gives the Russian campaign an air of legitimacy whether or not it is immoral.

Yet the United States continues to give itself a special privilege (which only Israel can rival) by insisting the U.S. military has the right to defend itself against Russian anti-missile defense systems within Syrian territory. Yet, they argue, the Syrian regime does not have the right to defend itself against multiple ground and air invasions within their own country.

Though Western media continues to focus on Russia’s potential role in hacking U.S. elections and its faults in the Syrian conflict, the road to war our leaders are taking will affect us all severely — meaning we cannot afford to have the media cover it irresponsibly.

This article (The US Edges Dangerously Closer to War with Russia: What You Aren’t Being Told) is free and open source. You have permission to republish this article under a Creative Commons license with attribution to Darius Shahtahmasebiand theAntiMedia.org.