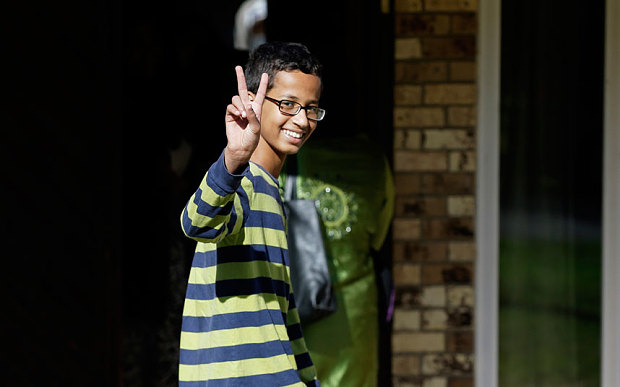 Cool clock, Ahmed. Want to bring it to the White House? We should inspire more kids like you to like science. It’s what makes America great.

Hi @IStandWithAhmed, we ? building things at @twitter too. Would you consider interning with us? We’d love it — DM us! #IStandWithAhmed

How do I get in touch with Ahmed? We (@reddit) wanna intro him to some of our friends in science (+ internship?) http://t.co/Bwgnbz179O — Alexis Ohanian (@alexisohanian) September 16, 2015

You’ve probably seen the story about Ahmed, the 14 year old student in Texas who built a clock and was arrested when he…

Hey Ahmed, give me a call in a couple years. We could always use smart, curious & creative people. https://t.co/02a4feMrk5

Hi @IStandWithAhmed ! I’d love you to join us for our science show Generator in Toronto on 28 Oct. There’s a ticket waiting for you. — Chris Hadfield (@Cmdr_Hadfield) September 16, 2015

Ahmed, don’t let this stop your creativity. Come hang out at Autodesk and we’ll make something new together. #IStandWithAhmed — Carl Bass (@carlbass) September 16, 2015

Despite the outpouring of support for Ahmed, including from President Obama and Hillary Clinton, Irving’s mayor did not share their outrage at the arrest.

Ahmed is the one who suffered, but he is happy and positive after the incident which would have been a torturous experience for any kid.

This Article (US President, Tech CEOs Invite Ahmed Mohamed – The 14-Year-Old ‘Bomb-Wielding Terrorist’) is free and open source. You have permission to republish this article under a Creative Commons license with attribution to the author and AnonHQ.com.