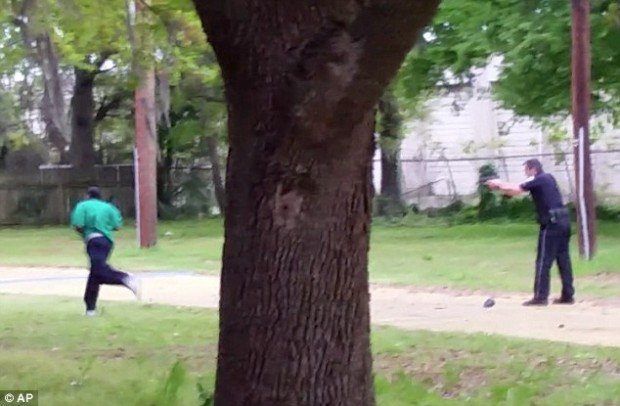 Last July, one grandfather, Charles Green, was named ‘Angry Grandpa’ on YouTube after the video he posted of him reacting to the brutal killing of an unarmed black man, Eric Garner, went mega viral on the social media outlet.

Green reacted strongly, the video captured emotions and feelings, and some said that it is exactly how many of the American public feel towards the police.

But in a new video Green posted this month, he reacted more than how he did last year. North Charleston Police Officer, Michael Slager, shot dead an unarmed black man on April 4th. Unfortunately, the incident happened not far from where Green lives. In the video, he explained that this recent shooting took place 15 minutes away from his home and it has made him scared because he fears it might soon be his turn to face this brutality from the police.

“He was shot five times in the back, and he’d have gotten away with it. He would have completely gotten away with it if that gentleman hadn’t had his camera on his phone and he actually filmed what happened, that man would have gone free! He would have been called a hero! “I feared for my life,” no you bastard you shot and killed an innocent man, over a tail light? OVER A BRAKE LIGHT BEING OUT! First of all you tased him, and when the man got scared and ran, you shot him! YOU MURDERED HIM!” Green exclaims in the video.

Soon after, Green is seen very angry and upon grabbing a hammer from inside a nearby cabinet, he began smashing his table with it to symbolically represent the police officer as he repeatedly deemed the officer ‘guilty.’

When asked by his relative if he believed giving the police body cameras would help stop police brutality, Green responded by saying, “Body cams??? Big f**king deal! They can turn those off and on, Michael! ‘Oh, there’s a man, let me turn it off first, I’m going to kill the bastard.’”

This new video, too, has gone viral and lots of people are still viewing it on YouTube and reacting to ‘Angry Grandpa’s’ actions and how the police officer should have handled the case professionally, rather than shooting.

An unarmed black man, Walter Scott, was driving his passenger home for a cookout when he was pulled over by Officer Michael Slager for a broken tail light. He was then shot multiples times by the officer as he tried to flee the scene.

But thanks to a bystander who saw and recorded the incident, the officer did not have an opportunity to ‘twist’ what occurred. Slager has been charged with murder and fired from the police department.

His trial is yet to begin but many activists including ‘Angry Grandpa Green’ say it is a test case for the nation, as people both in and outside the country are following the case with keen interest.