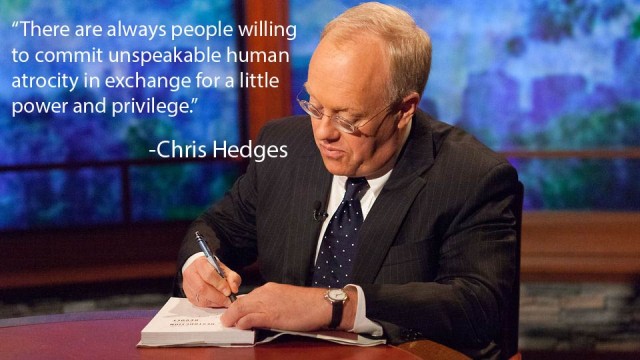 Chris Hedges is a bestselling author, activist and Pultizer prize winner. A veteran journalist for the New York times, he points out in an interview with Vice reporter Ben Makuch that journalists are never “objective” when reporting an issue; they are manipulators of facts.

However, journalists who care about reporting the truth end up running into problems.

His interview with VICE was truly revealing, and well worth a watch.

Revolution Is A Best Case Scenario

Chris Hedges points out that most people are unable to see just how fragile the status quot is, and that it was his experience in war-torn countries that informs him of how close to the brink we could be.

He then states that Neo-liberalism and globalization was a lie that has only concentrated wealth into the hands of a few corporate elite; he points out that figures like unemployment are lies, easily sussed out when one observes the failing infrastructure all over the US.

People are breaking down as well, held together by a “mania for hope”, explaining why politicians like Obama have come to power. However, as we now know, this was but a political pacifier… false hope that would keep people from actually rising up, keeping them addicted to their happy thoughts… clinging to repeated promises for hope and change.

Hedges is hopeful that a revolution can occur in America, indeed he believes that this is the only real hope it has left: the hope that the People will at long last wake up and act for their own interests.

In order to succeed, the American People must refuse to cooperate with the corporate entities that enslaved them; they must stand against politicians who keep launching wave after wave of increasingly draconian surveillance laws- laws, I must add, that are designed to corral them, and NOT some terrorist… and prevent them from tearing down the system.

While we may be afraid of the consequences of revolt to our own lives, we have to understand that every successive generation depends on our actions today; to remain “hopeful” in a system that has been proven corrupt is to remain passive and accept “the death sentence that is being handed to us by these corporate forces”.

There simply isn’t any way to vote against the interests of the corporate entities, and people are beginning to realize this.

The Occupy Movement was born of this increasing realization, as young white people begin to face the unemployment and strife that had been previously relegated to minorities.

He states that the Occupy Movement was itself heavily infiltrated by the government, at least while they were pitching their tents at Zuccotti park. This is not a wild assertion, for government documents do show that the police and DHS had worked together with the banks to target, arrest and politically disable peaceful American protesters- they had detailed plans on how they would crush Occupy protests, going so far as to designate it a “terrorist threat” (so THAT’S why we need bulk data collection).

While the government, bankers and corporations realize that organisations like Occupy represent a threat to its continued existence, they do not realize that their continued refusal to act rationally by acceding to at least some of Occupy’s demands would only inflame tensions further.

Hackers Are The Last Investigative Journalists

When asked about whether the government spies on him, Chris Hedges states that he suffers from minor inconveniences- however the people the government truly fears is the hackers.

Mass surveillance has prevented investigative journalism from occurring as it once had; whistle-blowers who speak about fraud or malfeasance can be easily traced and apprehended. Hackers are thus the only people left who can gain access to the truth, which explains why the government has come down so harshly on people like Jeremy Hammond (revealed targeting of activists), Chelsea Manning (war crimes), Edward Snowden (NSA surveillance) and Julian Assange (war crimes).

Finally Hedges explains why the mainstream media is so useless: the FCC was deregulated and a handful of media companies began buying up the smaller corporations- literally shrinking the boundaries of acceptable debate so that only mainstream opinions get voiced.

Alternative media has risen up from the graves of the once-diverse media landscape, and does the job of real journalism far better than the mainstream outlets of today.

At the end of his interview, Hedges was not afraid of criticizing VICE itself, “well what happens, and I think you even see it a little with VICE, as you reach an audience and tell a story that the commercial media is not telling, then the power elite comes to you and says to you ‘oh why don’t you come to the White House’… and then you get addicted to that access and it kills you.”

This Article ( Pulitzer Prize Winner, Chris Hedges, Believes That America is On The Edge of Revolt) is free and open source. You have permission to republish this article under a Creative Commons license with attribution to the author(CoNN) and AnonHQ.com.