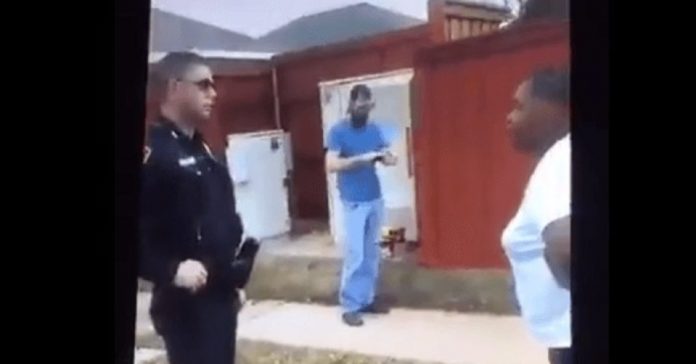 “If a white mother had called police about their son being choked, I guarantee that the officer would not have bypassed the suspect and arrested the mother.”

Highlighting the power of technology to bring injustice to light, a Texas police officer caught on cellphone video brutally arresting a black mother and her teenage daughters is now under investigation after millions of people watched the shocking encounter and voiced their outrage on the web, and on the streets.

Fort Worth resident Jacqueline Craig called the Forth Worth Police Department (FWPD) on Wednesday after a neighbor reportedly assaulted her 7-year-old son for littering. Relatives said the older white man had “grabbed the boy by the neck in an attempt to get him to pick up the trash,” the Forth Worth Star reported.

The video, viewed on Facebook by 2.4 million people as of early Friday, shows the unnamed officer reporting to the call and then proceeding to harass and question Craig. (Warning: graphic content and language).

“Well, why don’t you teach your son not to litter?” the officer asked.

“He can’t prove to me that my son littered,” Craig responded. “But it doesn’t matter if he did or didn’t. It doesn’t give him the right to put his hands on him.”

“Why not?” the officer challenged.

As Craig’s 15-year-old daughter moves toward her mother to de-escalate the situation, the officer grabs them both and brutally wrestles them to the ground as he threatens them with a taser. Craig’s other daughter filmed the interaction before being arrested herself.

“It’s not a situation where someone used a racial slur, but racism is still all over it,” said Lee Merritt, an attorney representing the family, during a Thursday press conference. “If a white mother had called police about their son being choked, I guarantee that the officer would not have bypassed the suspect and arrested the mother.”

Merritt said that Craig and her 19-year-old daughter, Brea Hymond, were arrested and “being held on the typical charges following police misconduct 1) resisting 2) interference 3) failure/ID.” They were released Thursday on bond. The 15-year-old daughter was released from a juvenile detention late Wednesday.

Calling for the officer to be immediately terminated, protesters gathered outside the old Tarrant County Courthouse Thursday night to protest the incident. At the same time, messages of condemnation and outrage continue to pour in with people posting under the hashtag #ThouShallNotLitter.

In a statement Thursday, the FWPD said the Internet Affairs Unit began to “immediately” review the incident after the Department received information regarding the video. “The involved officer has been placed on restricted duty status by the Chief of Police pending the outcome of the internal investigation,” it states.

Responding to the incident, Terri Burke, executive director of the ACLU of Texas, said the officer “ignored basic community policing standards and his own responsibility to de-escalate the confrontation.”

“This incident and countless others like them demonstrate that for people of color, showing anything less than absolute deference to police officers—regardless of the circumstances—can have unjust and often tragic consequences,” said Burke. “This fundamental injustice is also a threat to public safety. If a black woman in Fort Worth can’t call the cops after her son is allegedly choked by a neighbor without getting arrested, why would she ever call the cops again?”

New York Daily News columnist Shaun King observed that the injustice exposed in the video is unfortunately the “reality of being black in America.”

“Clearly, black folk already know good and well that something simple like this is never simple with police in our country,” he wrote. “It’s good that the exchange was filmed, because what unfolded, and what this racist officer said, would not be believed had it not been captured on film.”