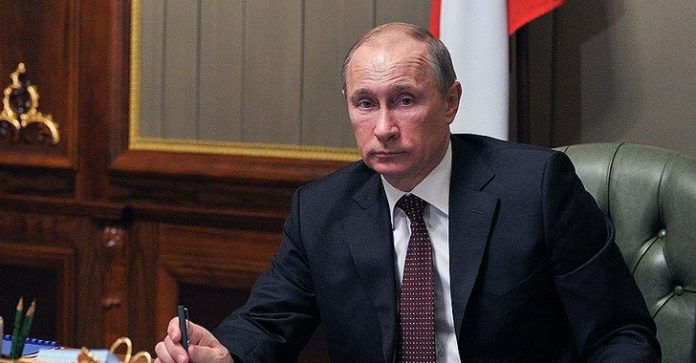 As the United States continues to develop and upgrade their nuclear weapons capabilities at an alarming rate, America’s ruling class refuses to heed warnings from President Vladimir Putin that Russia will respond as necessary.

In his most recent attempt to warn his Western counterparts about the impending danger of a new nuclear arms race, Putin told the heads of large foreign companies and business associations that Russia is aware of the United States’ plans for nuclear hegemony. He was speaking at the 20th St. Petersburg International Economic Forum.

“We know year by year what will happen, and they know that we know,” he said.

Putin argued that the rationale the U.S. previously gave for maintaining and developing its nuclear weapons system is directed at the so-called “Iranian threat.” But that threat has been drastically reduced since the U.S. proved instrumental in reaching an agreement with Iran that should put to rest any possible Iranian nuclear potential.

The Russian president also highlighted the fact that although the United States missile system is referred to as an “anti-missile defense system,” the systems are just as offensive as they are defensive:

“They say [the missile systems] are part of their defense capability, and are not offensive, that these systems are aimed at protecting them from aggression. It’s not true…the strategic ballistic missile defense is part of an offensive strategic capability, [and] functions in conjunction with an aggressive missile strike system.”

Russia views this as a direct attack on their security.

“How do we know what’s inside those launchers? All one needs to do is reprogram [the system], which is an absolutely inconspicuous task,” Putin stated.

Putin further explained the implications of this missile defense system’s implementation without any response from Russia. The ability of the missile defense system to render Russia’s nuclear capabilities useless would cause an upset in what Putin refers to as the “strategic balance” of the world. Without this balance of power, the U.S. would be free to pursue their policies throughout the world without any tangible threat from Russia. Therefore, this “strategic balance,” according to Putin, is what has kept the world safe from large-scale wars and military conflicts.

Following George W. Bush’s 2001 decision to unilaterally withdraw the U.S. from the 1972 Antiballistic Missile Treaty, Russia was, according to Putin, left with no choice but to upgrade their capabilities in response.

“Today Russia has reached significant achievements in this field. We have modernized our missile systems and successfully developed new generations. Not to mention missile defense systems…We must provide security not only for ourselves. It’s important to provide strategic balance in the world, which guarantees peace on the planet.

Under the guise of following an anti-nuclear weapons policy, the Obama administration has announced plans for a $1 trillion nuclear weapons plan, which — let’s face it — is targeted at Russia.

Neutralizing Russia’s nuclear potential will undo, according to Putin, “the mutual threat that has provided [mankind] with global security for decades.”

There is no winner in a nuclear war between Russia and the United States. This has been not only confirmed butrepeatedly warned about by atomic scientists who — if we are being honest — are the people whose opinion on this topic should matter the most.

It should, therefore, come as no surprise that NASA scientists want to colonize the moon by 2022 — we may have to if we don’t drastically alter the path we are on. As Albert Einstein famously stated:

This article (Vladimir Putin Just Issued a Chilling Warning to the United States) is free and open source. You have permission to republish this article under a Creative Commons license with attribution to Darius Shahtahmasebi andtheAntiMedia.org. Anti-Media Radio airs weeknights at 11 pm Eastern/8 pm Pacific. If you spot a typo, please email the error and name of the article to [email protected].