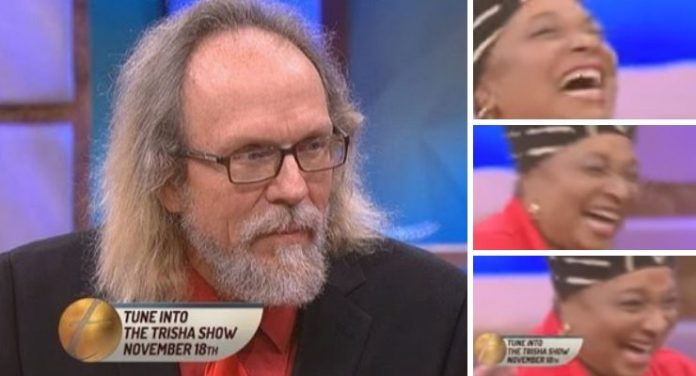 (TMU) “Sweetheart, you’ve got a little black in you,” said Trisha Goddard, host of The Trisha Show, to her guest. Craig Cobb, an outspoken white supremacist could only stare back in disbelief. All around him, the audience cackled. But, there was one voice that rose above the rest. It belonged to a woman who couldn’t contain her chuckles over the recent revelation, and it’s so pure and genuine, it may cause you to burst into laughter, as well.

The humorous scene was uploaded to YouTube by the Daily Mail Online. Cobb, who is recognized for trying to turn Leith, North Dakota, into a “white’s only” village, agreed to appear on the television show. He probably wished he wouldn’t have, however, as he learned he has African heritage. Now, he may not be allowed in the white-only club.

Goddard read the results of the DNA test aloud. Cobb is 86 percent European heritage, but he is also 14 percent sub-Saharan African. “Wait a minute! Wait a minute!” he yelled after the announcement. “Sweetheart, you’ve got a little black in you,” Goddard replied.

The stunned white supremacist refused to return the host’s fist pump after she called him a “bro.” And, despite the results of the analysis, Cobb refused the science of the test. “This is called statistical noise,” he remarked to those listening. Undeniably, the best part of the ordeal is the woman’s reaction to his left.

She didn’t even try to contain her humor as the narrow-minded individual learned an important truth.

View the clip below:

While the video above is funny, it does highlight the serious issue of racism. For nothing more than having different skin pigment, some people are willing to harass, outlaw, and harm others. The best thing activists can do to combat racism, bigotry, and misogyny is to act out of love, share educational and informative content which might persuade others to be more open-minded and to stand up for those who are being oppressed. Maybe then, future generations will regard racism as an archaic concept.