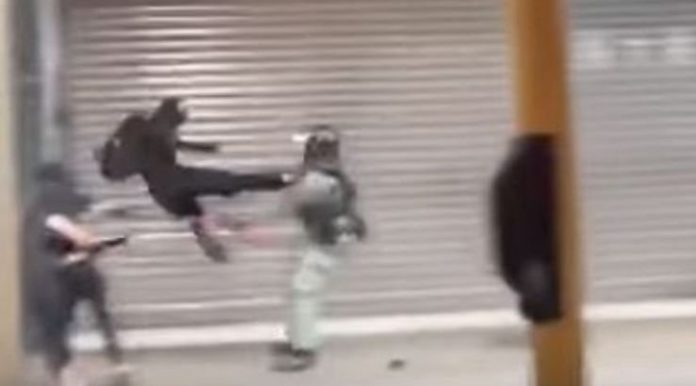 A Hong Kong police officer was knocked down by a flying drop kick as he attempted to arrest a protester during the 19th week of anti-government unrest.

The officer can be seen struggling over custody of a protester until the kick levels him, followed by others running up and hitting the man before they run off.

The protests – this week’s revolving around a new ‘anti-mask’ law – saw turnouts in more than half of the semiautonomous Chinese territory’s 18 districts.

The demonstrations in Hong Kong on Sunday were varied, including smaller gathering across the city, and also cases of vandalism and arson that targeted government offices, subway stations, and several banks and shops.

On Sunday, a Hong Kong police officer was “slashed in the neck” by a black-clad protester at approximately 5:30 p.m., putting the officer in the hospital according to the Hong Kong Free Press.

Video footage from Ming Pao showed a team of officers about to enter Kwun Tong MTR station, as a man came up from behind and jabbed a sharp object – similar to a box cutter – towards the neck of one of the officers. The officer in question then chased down the assailant, and two people were arrested on the scene.

“The sharp-edged object is a deadly weapon. Police will strive to investigate all violent acts,” read and official statement. Eyewitnesses reported the right side of the officer’s uniform was stained with blood.

In response to the pro-democracy movement in Taiwan, US Senators led by Senator Ted Cruz (R-TX) have advanced draft legislation which would penalize officials in mainland China and Hong Kong who suppress freedoms throughout the city – and would require annual justification as to why the United States should allow Hong Kong special trade and business privileges, per the Times.

Cruz traveled to Hong Kong this weekend and met with key members within the protest movement. He was scheduled to meet with Hong Kong leader Carrie Lam, who canceled their meeting after he refused her request to keep their conversation confidential.

According to the Hong Kong office of China’s Foreign Ministry, Cruz had “lied through his teeth” and “made indiscreet remarks on Hong Kong affairs.”

Ted Cruz came to Hong Kong in black, a huge support for violent protesters. This afternoon, a rioter slashed a police officer’s neck. If Cruz still has a conscience, he should openly condemn such a brutal action. @tedcruz pic.twitter.com/HpQ534GcNi