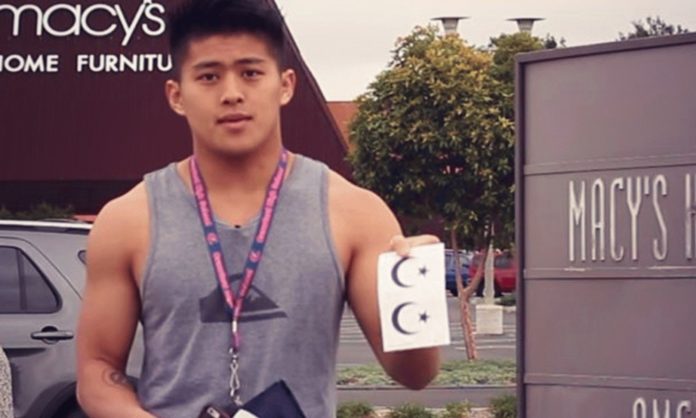 For three days, a man asked San Diego residents to label Muslims with ‘special badges’ in exchange for $40. The results of the experiment will shock you…

If Donald Trump is elected as president of the United States, not only does he intend to “build a wall” to keep immigrants out (though he has no actual plan to accomplish this, yet), he is keen to label all Muslim individuals with badges so they might be “tracked” as possible terrorists.

Unsurprisingly, he has become the favored candidate of fear-mongering white Supremacists, including the leader of the KKK, David Duke.

But, one might surmise, his outlandish ideas couldn’t catch traction with the average American citizen…right?

One would think not, but the horrifying social experiment (above) reveals otherwise.

Posing as a campaign volunteer for Donald Trump, the video’s producer asks passers-by if they would be willing to give Muslims special badges in exchange for $40. Shockingly, many agree.

Again and again, the San Diego residents fail to realize the exact parallel to the rise of the Third Reich in Germany, in which Nazis were paid to do the exact same. Is history repeating itself?

According to The Independent, the video, which has been watched nearly 91,000 times, draws a direct link between Trump’s anti-Muslim comments and the wider complacency surrounding Islamophobia in U.S… as it was meant to.

“The twist is that they’ll get paid for each Muslim they catch, just like how the Nazis were paid to kill the Jews,” he said.

Some feigned indifference and started to walk away… but then responded amiably once they heard some cash was to be made for succumbing to fascism.

It took three days of filming for someone to call out the horrendous Nazi-like tactics. Wynn had to deliberately approach Muslims and other religious minorities with the proposition. Not only did the offer justifiably infuriate most, their reactions constitute – in all irony – what would qualify ‘America’ as a great country, as The Anti-Mediapoints out. They refused to be cowed by cash which might result in harm for another down the road.

This experiment needs to be shared to enlighten the American populace before it is too late.

This article ([Watch] Ordinary Americans Turn Fascist For $40 In Social Experiment) is free and open source. You have permission to republish this article under a Creative Commons license with attribution to the author and TrueActivist.com