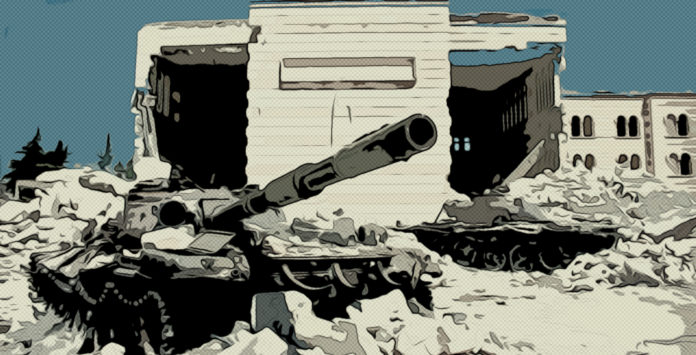 (TFC) Washington D.C. – Those who don’t understand history are doomed to repeat it, those that do understand are doomed to watch in horror while everyone else repeats it. The run up to overthrowing President Assad of Syria was occurring before The Fifth Column existed. I covered it when I wrote daily for The Anti-Media, and even before then when I wrote for a Canadian outlet called Digital Journal. It began long before that though.

It started in 2006 when the US decided it wanted to oust Syrian President Assad and started laying the ground work. This was proven by leaked Saudi Arabian intelligence cables hosted on Wikileaks. Julian Assange said of the leaks:

“That plan was to use a number of different factors to create paranoia within the Syrian government; to push it to overreact, to make it fear there’s a coup…so in theory it says ‘We have a problem with Islamic extremists crossing over the border with Iraq, and we’re taking actions against them to take this information and make the Syrian government look weak, the fact that it is dealing with Islamic extremists at all.”

In 2009, the United States began secretly funding opposition groups within Syria and even provided $6 million to Barada TV, a UK-based TV channel, to produce propaganda to support “regime change” inside Syria.

Slowly but surely, the US and its allies put this plan into effect until in March of 2011 spontaneous demonstrations popped up in Syria demanding Assad step down. Of course, Huffington Post UK would later point out that these demonstrations weren’t spontaneous at all. They were orchestrated by the Central Intelligence Agency.

In October of 2013, the US was bombarded by television pundits who advocated airstrikes in Syria. Viewers were engrossed. The television stations that aired these pundits never told their viewers that the people advocating the airstrikes were employed by the companies that made the missiles that were to be used. This was the straw the broke the camel’s back, and activist began pressuring DC to deescalate.

In September of 2014, President Obama openly admitted the plan was for regime change. He boldly stated:

“We are not going to stabilize Syria under the rule of Assad.”

Throughout this time the West has tried various methods of justifying an invasion. There were claims of chemical weapon attacks perpetrated by Assad, but the only proof offered was the analysis that the weapons might have originated from the Syrian military’s storerooms. The average American was smart enough to realize that it’s a civil war and that the weapons of all sides came from the Syrian military, except of those “accidentally” dropped to Islamic State forces by the United States. The chemical weapons claim disappeared when the Kurds were hit by chemical weapons. The Kurds were fighting the Islamic State, not Assad. There were scores of unsuccessful airstrikes launched by the West. They accomplished nothing, and the Islamic State continued to destabilize Assad. NATO allies openly attacked those fighting the Islamic State.  The plan was working and in June of 2015 the Brookings Institute published its paper on how to reorganize Syria.

Then suddenly, everything went wrong for the West. Russia announced it was going to begin providing air cover for Assad’s forces, and their airstrikes were just a tad more accurate. The Kurds in Iraq had massive successes against the Islamic State and bottled them up in two major cities. This offensive made thousands of Iraqi Kurds available for the fight against the Islamic State in Syria. Everything looked grim. It seemed that almost a decade of work was going to fly out of the window and Assad would remain in power.

That sounds crazy? A day after the attack, the US State Department released the statement of the International Syria Support Group. It reads in part:

“In this respect they affirmed their support for a ceasefire as described above and for a Syrian-led process that will, within a target of six months, establish credible, inclusive and non-sectarian governance, and set a schedule and process for drafting a new constitution. Free and fair elections would be held pursuant to the new constitution within 18 months. These elections must be administered under UN supervision to the satisfaction of the governance and to the highest international standards of transparency and accountability, with all Syrians, including the diaspora, eligible to participate.”

That’s right. Assad isn’t even out of power yet, but the new US-puppet constitution will be ready within 18 months.

Recap: The United States planted the seeds of revolt through propaganda, led the demonstrations against Assad, helped arm and train the Islamic State, repeatedly pushed a false narrative to gain a pretext to invade,denied proper air support to those fighting the Islamic State, and will now capitalize on the murders committed by the Islamic State to achieve its goal of ousting Assad. They’re so confident of success this time, there’s a timeline for the new constitution.

During all of this, over 300,000 people died and 6 million more were displaced. There will be more death and destruction. Unless, of course, Assad voluntarily steps down and allows Syria to become another US colony, which is highly unlikely.

The horrible part of this is that despite warnings, the American people did nothing. We’ve been had, but we’re the lucky ones. We’re still alive.

This article (How You Were Tricked into Supporting the Syrian War) originally appeared on The Fifth Column and was used with permission.