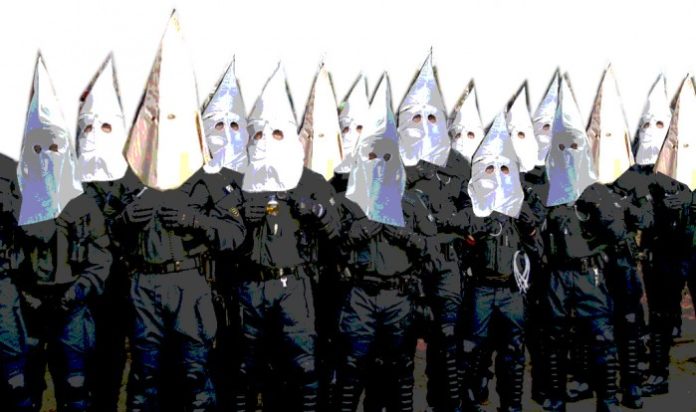 In spite of chronic government claims that Muslims are to blame for acts of terrorism in the United States, a new study has refuted this narrative.

The analysis, conducted by the Washington D.C.-based research group New America, found that since 9/11,more people have died from deadly, ideological attacks committed by white, right-wing extremists than from attacks instigated by radical Muslims.

As the New York Times summarized,

“Non-Muslim extremists have carried out 19 such attacks since Sept. 11, according to the latest count, compiled by David Sterman, a New America program associate, and overseen by Peter Bergen, a terrorism expert. By comparison, seven lethal attacks by Islamic militants have taken place in the same period.”

The count did not include attacks committed by white Americans who lacked a clear ideological motive for their violence—such as the Aurora and Newtown shooters.

These conclusions run in stark contrast to portraits painted by pundits and politicians alike. Incidents of FBI-foiled Islamic terror plots regularly make headlines, even when those plots are facilitated by The Bureau itself. Just this week, the chair of the House Intelligence Committee, Rep. Devin Nunes of California, claimed that America must combat “the highest threat level we have ever faced in this country,” asserting the threat comes from “the radicalization of young people and foreign fighters heading to Iraq and Syria to join terror groups.”

While the study is a powerful indictment of state-sponsored propaganda to manufacture consent for war and violations of freedom, it also implicitly demonizes opponents of the government, who have similarly been vilified by the state. The Department of Homeland Security has warned of “right wing terror threats” from anti-government extremists who, according to CNN, believe the law does not apply to them. While the threat is widely-circulated, those reporting it never ask if it is possible to be anti-government, not out of violent extremism, but because of opposition to the government’s own violent extremism.

Just as radical Islamic and right-wing extremist violence are unjustifiable, so is any other type of violence that harms innocent and non-violent individuals. It is revealing to compare the data from the New America study with data on other violent threats—most glaringly, that of police officers who kill citizens at rates that make radical Islamists and right wingers’ look like amateurs.

According to the New America study, Islamic far right extremists have killed a total of 75 people in 14 years. As of June 10th, police had killed over 500 people in 2015 alone. If police miraculously manage to kill no one else until the end of June, that figure amounts to 83 people killed per month over a six-month period. These killings are often nothing but ideological, based in a rigid ideology of authority, power, and the compulsion of citizens to comply—a premise that underlies nearly all government action. This is further illustrated by the over 6 million civilians and soldiers killed in major U.S. wars since 1945—again, rooted in the disingenuous ideologies of “democracy,” “freedom,” and “security.”

Having a conversation about violent, ideological extremism is vital, but it should mean discussing all types of violent behavior, no matter who is committing it. If the government were truly concerned with protecting its citizens, it would focus more of its efforts on taming rogue police forces in addition to stopping extremist attacks. Its focus, instead, rests on exploiting tragedy to usurp power and authority, from tightening its grip on surveillance to increasing police powers or launching military invasions. Such a discussion, however, is unlikely to receive meaningful attention.

Regardless, the study serves as a necessary vindication for widely-persecuted Muslims, who endure unfair judgment, mistrust, and attacks because of the tragedy of 9/11. Though it is unlikely to shift the narrative, its findings add to an ever-increasing body of evidence that proves the State’s declared objectives are starkly different from its observed authoritarian policies.

This article (White Terrorists Kill More than Muslim Terrorists in US, Cops Kill More than Both) is free and open source. You have permission to republish this article under a Creative Commons license with attribution to the author andTheAntiMedia.org. Tune in! The Anti-Media radio show airs Monday through Friday @ 11pm Eastern/8pm Pacific. Image credit: kotzendes-einhorn.de. Help us fix our typos: [email protected].