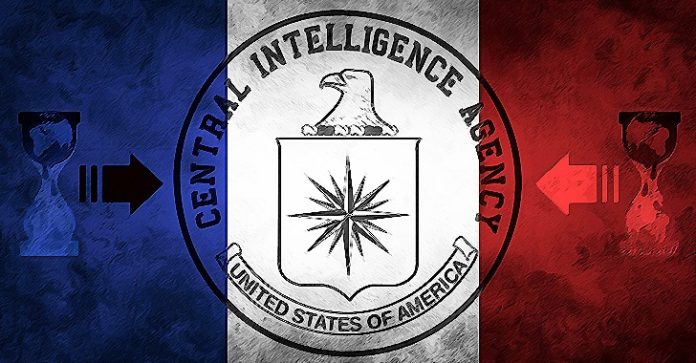 by Everett Numbers at theantimedia.org

A fresh release of classified documents shows the CIA permeated France’s 2012 presidential election, according to Wikileaks. The agency targeted every major party, as well as the current and former president and other prominent candidates.

Wikileaks has been teasing its upcoming “CIA Vault 7” document dump. Thursday’s release of seven pages containing three CIA tasking orders regarding France’s 2012 election is the first such promotion to offer something of substance.

The documents show CIA spies working in human intelligence (HUMINT) and electronic, or signal, intelligence (SIGINT) were directed to infiltrate each major French political party and several leaders from November 21, 2011 to September 29, 2012. Elections took place between April and May of 2012, meaning the operation began about six months before the vote and lasted around four months afterward.

Assessing that President Sarkozy’s Union for a Popular Movement was “not assured of winning the presidential election,” the CIA issued the espionage order, entitled “Non-Ruling Political Parties and Candidates Strategic Election Plans,” in order to better inform U.S.-France policy, according to the documents.

Among the specific instructions for spies were orders to obtain Sarkozy’s private talks “on the other candidates” as well as his own advisors. The agency valued information pertaining to changes in the party’s “perceived vulnerabilities to maintaining power” and its ideological direction, as well as Sarkozy’s interest in “the continuation of the party’s dominance,” the documents show.

Wikileaks cites a previous 2012 espionage order calling for the discovery of details on any potential French export contract or deal valued at $200 million or more as seeming to be connected to specific CIA tasks under the “Strategic Election Plans” order. Those tasks asked the questions: “What policies do they promote to help boost France’s economic growth prospects?” and “What are their opinions on the German model of export-led growth?”

Additionally, the CIA wanted to know the candidates’ positions on the Greek debt crisis and the roles of France and Germany in its management, along with information regarding the “specific proposals and recommendations” for and consequences of a Greek default on France’s government and banks.

The leaked documents were classified and for U.S. eyes only, marked “NOFORN” because they contained “Friends-on-Friends sensitivities.”

Wikileaks claims this most recent release will serve as “context” for its anticipated Vault 7 series.

It comes at a time of relentless speculation over Russia’s influence over the Trump administration and the November presidential election, as well as reported divisions in the White House since controversial leaks led to the resignation of General Michael Flynn as national security advisor to President Donald Trump.