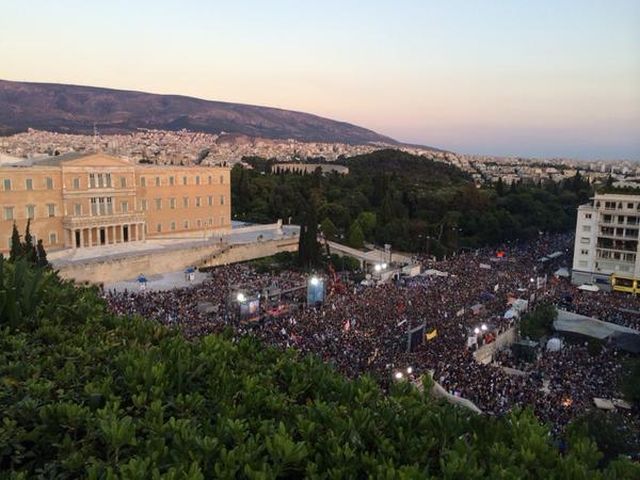 It seems only RT is keen on showcasing the true size of the NO protests. This most recent protest is awe-inspiring in size. CNN, Reuters, BBC, are keen to avoid filming the size of a major NO protest; instead, their reports are either claiming that Greece is a divided nation, is explaining why NO voters are idiots, or is centered around footage of fearful Greek INDIVIDUALS (ignoring NO protesters altogether, focusing on small clumps of NO protesters, and only providing zoomed-out shots for smaller NO protests).

NewsWeek claims tens of thousands protest both sides, but as with all the other mainstream sources, has refused to film the size of the YES protests as RT had for the NO. Suffice to say, journalistic “omissions” like these, demonstrated across almost all mainstream networks, is most disheartening, but not unexpected. Don’t trust my opinion, perhaps I am looking at the wrong sources. Google the YES and NO protests in Greece for yourself and come to your own conclusions.

This Article (What You WON’T See In Mainstream News: Greece “NO” Protests Are HUGE) is free and open source. You have permission to republish this article under a Creative Commons license with attribution to the author and AnonHQ.com.