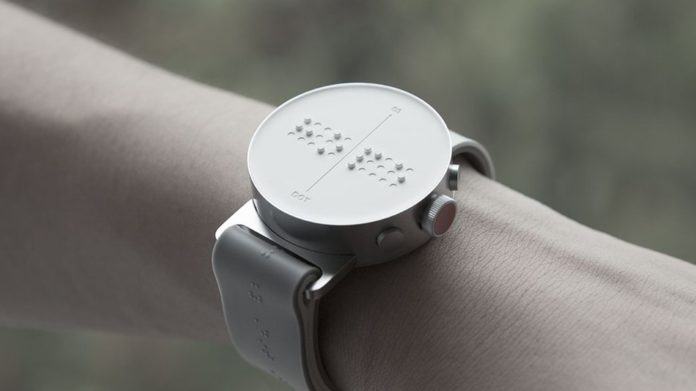 Dot, a South Korean startup, has produced the world’s first Braille smartwatch for the visually impaired, which uses Braille to let its users know the time. It also receives information from apps like WhatsApp, Google Maps, and Messenger; and can send text messages using two buttons located on its side panel. The smartwatch also supports Open API, which means anyone can develop or adapt apps for it.

The Dot Watch, as it is called, is a sleek Apple Watch-inspired smartwatch that converts texts, emails, notifications, and even e-books, into Braille. The smartwatch is based on haptic technology, which provides feedback or information in real time through touch. By linking to any Bluetooth device, the Dot Watch can pull text from applications like iMessage using voice commands. Eric Ju Yoon Kim, CEO of Dot, told Tech In Asia:

“90% of blind people become blind after birth, and there’s nothing for them right now – they lose their access to information so suddenly. Dot can be their lifeline, so they can learn Braille and access everyday information through their fingers, which is the goal of Braille literacy.

“Every time technology moves forward we see more real-time information, but for the blind, that’s a widening discrimination gap. We are solving that information discrimination with the equal accessibility the Dot smartwatch provides.”

Earlier, smartwatches for the visually impaired relied on audio prompts to relay information, which used to be disruptive. The Dot Watch, on the other hand, uses magnets and a grid of pins to display four Braille characters in real time that change at adjustable speeds, allowing users to read text messages and run apps via Bluetooth.

Kim says the Dot Watch, with a battery life of up to seven days, is the first step in his startup’s goal of offering Braille devices to the visually impaired. It aims to ship 100,000 watches in 2017, starting March, and the rest, 40,000, next year. 1,000 units of the Dot Watch will be sold on retail shelves in London for $320.

Dot has signed a $1 million agreement with the Kenyan government to bring 8,000 units of its upcoming Dot Mini, an educational Braille reader that aims to improve literacy. Further, in partnership with Google, the startup plans to launch the Dot Pad, a Kindle-like e-reader that will display shapes and images through tactile buttons, as early as 2018. Eventually, Dot wants to deploy a smart Braille system onto public infrastructure.

Bottom line: through its devices, Dot wants to make the education of Braille easier and accessible, as well as help the visually impaired walk on the streets without canes or guide dogs in the future. Doo Hyuk Chang, head of media relations at Dot, told Upworthy:

“We are also thinking of a module that will be installed in public areas such as bus stops, metro stations, airports, and other locations. For example, it could display the bus number, station name, time left for next transport to arrive.

“The Dot Pad will be the first Braille device that can display in several lines, and not, all in one line like the products out in the market right now. It will also be the first device to display graphs, functions, and other mathematical content that will make learning immeasurably easier for the visually impaired. “

The World Health Organization estimates that there are 285 million people with severe visual impairment around the world, out of which 39 million are completely blind. The Dot Watch has a lot of importance for the blind; literacy is a serious issue because access to Braille education is limited. This article (World’s First Braille Smartwatch for the Blind Hits the Shelves) is a free and open source. You have permission to republish this article under a Creative Commons license with attribution to the author and AnonHQ.com.