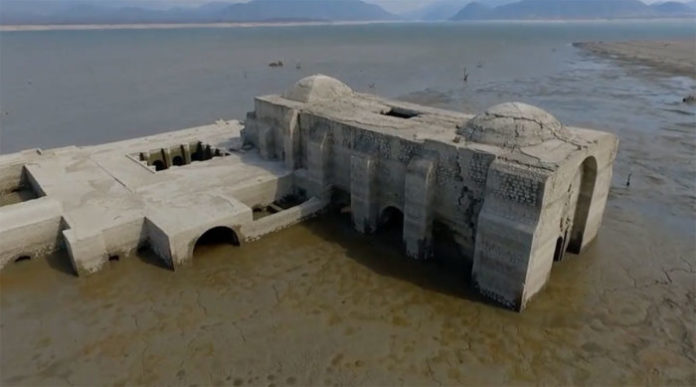 A church in Mexico built in the 16th century, that was submerged by water over 50 years ago, has resurfaced completely after severe drought. The submerged temple remains almost completely intact, without any damage.

Images of the Dominican church, located in the Benito Juarez Dam in Jalapa del Marquez, Oaxaca, were recently captured with a drone. The footage shows the church sitting strongly in the empty dam, and the once full flowing dam’s complete subsiding due to the drought.

Local residents believe it is by divine intervention that the church, which has been under water for decades, never got damaged. Some locals went by small boat to catch a glimpse of the historical, well-preserved building.

The area has now become a tourist attraction. Many people from around and outside Mexico who know of the story about the once submerged church, are now making their pilgrimage to the area to also witness the remarkable building.

Local tour guide and fisherman Miguel Oliveira said the temple was built in worship of the Virgin Mary in the late 16th century. The Roman Catholic Church is said to have financed the building of the church. “This temple is believed to have been built between 1550 and 1600. Here was venerated the Virgin Mary of assumption. She is the patroness of Santa María Jalapa de Márquez,” Oliveira was quoted as saying by RT English.

Mr Oliveira further said the church flooded in 1962 after the Benito Juarez Dam was built in the area. The dam was constructed from the sources of the Tehuantepec and Tequisistlán rivers to serve the local communities. But the then engineers failed to take the church into consideration, allowing the dam to completely swallow and submerge the structure. Due to the dangerous nature of the water levels then, residents living close to the area were resettled in a different area.

Reports suggest the church partially re-emerges every year when the rainfall subsides and temperatures rise, lowering water levels. Local media outlets report that in 2008, a drought uncovered a major part of the church’s structure for the first time in nearly 50 years.

However, this year, a severe drought reduced the dam’s water to just 16 percent of its 947 cubic hectometer capacity and almost uncovered the church completely, according to Mexico’s National Water Commission.

This made it possible for officials to use a drone to capture the full size of the building. Residents have been warned not to settle close to the dam, because disaster can easily strike once the rains start again.

Meanwhile, as residents are jubilating about the resurfacing of the former submerged church, they are also at the same time crying, asking for help from the Mexican government.

Most residents in the area are said to be fishermen and peasant farmers. The dam is a major source of their livelihood and the ongoing drought has wreaked havoc on their only income means, destroying their means of support.

The Mexican National Water Commission and the South Pacific Basin Organization have both responded to the request for help from the residents. The two bodies said they are currently monitoring the situation to see how best they could help affected residents in the area.

This article (Severe Drought Uncovers Over 400-Year-Old Submerged Mexican Church, Remains Intact [Video]) is a free and open source. You have permission to republish this article under a Creative Commons license with attribution to the author and AnonHQ.com.