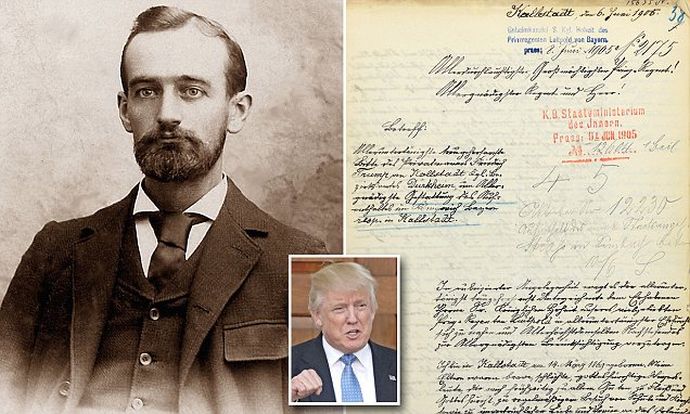 A newly uncovered letter reveals Donald Trump’s grandfather once wrote a heartfelt letter to the de facto ruler of Bavaria, begging not to deport him and his family from Germany, in 1905.

Friedrich Trump’s letter to Luitpold, Prince Regent of Bavaria, was discovered by the German tabloid Bild last November. The letter, written in German, has been translated into English and reprinted in the latest issue of Harper’s magazine — and it has a lot of relevance today.

In 1885, Friedrich, then 16, moved to the United States from the village of Kallstadt in south-west Germany. Though he started working as a barber, he made a fortune in the Klondike Gold Rush and became an American citizen in 1892.

However, he was issued with a deportation notice in 1905 when the government found he failed to complete the country’s mandatory military service and to register his initial emigration to the United States. The authorities threatened Friedrich with deportation in February 1905: “The American citizen and pensioner Friedrich Trump, currently residing in Kallstadt, is hereby informed that he is to depart the state of Bavaria, or face deportation.”

In an attempt to fight the decree, Friedrich requested the “well-loved, noble, wise and just” monarch to block the deportation notice:

“My parents were honest, plain, pious vineyard workers. They strictly held me to everything good — to diligence and piety, to regular attendance in school and church, to absolute obedience toward the high authority.

“I emigrated in 1885, in my sixteenth year. In America I carried on my business with diligence, discretion, and prudence. God’s blessing was with me, and I became rich.

“[When I came back from the U.S.] The town was glad to have received a capable and productive citizen. My old mother was happy to see her son, her dear daughter-in-law, and her granddaughter around her; she knows now that I will take care of her in her old age.

“But we were confronted all at once, as if by a lightning strike from fair skies, with the news that the High Royal State Ministry had decided that we must leave our residence in the Kingdom of Bavaria. We were paralyzed with fright; our happy family life was tarnished. My wife has been overcome by anxiety, and my lovely child has become sick.

“Why should we be deported? This is very, very hard for a family. What will our fellow citizens think if honest subjects are faced with such a decree — not to mention the great material losses it would incur. I would like to become a Bavarian citizen again.”

Though he pleaded to remain in the country he felt was his home, despite the illegality of his actions, his expulsion order was not revoked. He lost his Bavarian citizenship, and he and his family was forced to abandon Germany for good and move back to the United States in July 1905.

The letter has been published in English at a time when Donald Trump’s executive order on immigration has ignited a flurry of immigrants residing in the U.S. to worry about possible deportation.

On March 2, the U.S. Immigration and Customs Enforcement deported Houston father of two American children and the husband to a naturalized U.S. citizen — with no criminal history — to El Salvador, a country he hasn’t seen in 16 years. Why was he deported?

Jose Escobar, 31, lost his legal temporary protected status in a paperwork gaffe more than a decade ago when he was still a teen in Houston. While Friedrich purposely did not conform to the German law yet sought mercy, Jose Escobar missed the deadline and an immigration court date – due to a bad attorney.

Friedrich Trump not only expressed his pain about the prospect of facing expulsion, but also acknowledged how America made him rich. Ironically, his grandson Donald Trump, president of the United States, claims to deport only the undocumented immigrants with violent criminal histories, but forcibly sends back immigrants who make America great.

This article (How Donald Trump’s Immigrant Grandfather Once Begged Not to be Deported) is a free and open source. You have permission to republish this article under a Creative Commons license with attribution to the author and AnonHQ.com.