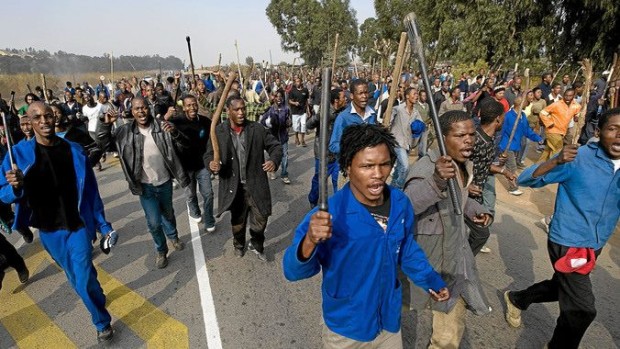 The pictures you are about to see in this news story are barbaric and horrible. Viewer discretion is highly advised. In recent days in South Africa, a deadly outbreak of anti-foreigner violence has left some African migrants dead, injured and homeless.

There are lots of Africans who have migrated from their home countries to South Africa to seek greener pastures. But the recent violence against them shows that some South Africans do not want them in the country anymore. Many say that the foreigners have taken all their jobs from them, and that is why they want to cleanse South Africa of their fellow African foreigners.

“Our citizens took action because they would n0t leave and they were being told they must leave. They came with nothing; they can go with nothing as well. I feel bad because they left crying, but we have no choice. They should go because we have no job. I’m a citizen and want to work for 150 rand a day but foreigners will do it for 70 rand a day. In the kitchens and the factories they are taking over our jobs. They bring cheap goods and we don’t know where they are from. They leave their countries with a lot of skills and we have nothing”, a South African citizen who supports the xenophobic attacks said.

Some foreigners had their property destroyed and looted. The unfortunate ones were brutally killed either by being burned alive, or being clubbed to death, and many have fled to the safety of neighboring countries. Police said that they have recovered four bodies, badly burnt.

The city of Durban is the worst hit, and victims spoke of the horrible ordeals that they had suffered from the agitated youth who engage in these attacks.

“They beat my husband with sticks; they took everything, money, food, clothes for the baby. They said if you don’t give us these things, we will kill you. We want your shoes; remove your T-shirt.’ They took everything, even passports and IDs. The police came but they didn’t do anything because they are afraid of those boys”, a victim told reporters.

Gift of the Givers is an aid organization helping fleeing migrants by giving them temporary shelters. It said that more than 10,000 immigrants have fled their homes in Durban alone. There is no accurate data to determine those affected in other parts of the country.

“Over the last 48, 72 hours, it has escalated substantially. You are now talking about 10,000 people who have been displaced. These camps were basically set up very quickly, the violence is spreading,” Imtiaz Sooliman-founder of Gift of the Givers said.

The incident is tarnishing the image of South Africa, both on the African continent and outside. Many Africans took to Social Media to express their disappointment with a country that they had all supported during the white minority rule known as apartheid.

“ECOWAS Heads of State and Government condemn the barbaric, criminal and xenophobic murder of innocent African foreigners in South Africa. We welcome the statement of our brother, President Jacob Zuma, and his assurances of a peaceful resolution, but we request for an urgent national action plan, backed by a behavioral change campaign against xenophobia in South Africa”, a statement signed by ECOWAS chairman, John Mahama said.

The Ghanaian government has said that it is evacuating its citizens from South Africa as soon as possible. Other African countries too are doing same and some have held protests at the embassy of South Africa in their home countries. We urge all those who are engaged in these violent acts to exercise restraint and use the appropriate channel to seek redress, because human life is precious.