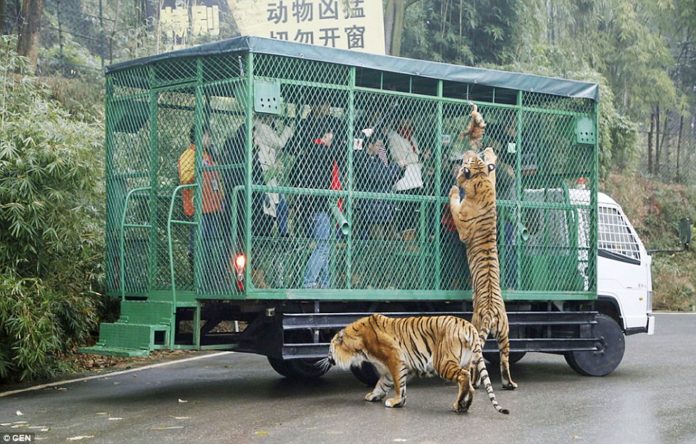 According to The Daily Mail, the one-of-a-kind zoo acknowledges that humans have encroached upon animals’ natural habitats, therefore, should pay them a visit – but in a safe, secure vehicle.

In order to attract the exotic beasts, chunks of meat are tied to the outside of a vehicle. Tourists then drive through each enclosure, getting an up-close-and-personal encounter with creatures of all kinds.

In many ways, the zoo in Chongqing city is giving people the closest possible dining experience with the animals – without actually becoming dinner themselves.

Tourists are given the opportunity to offer food to lions, tigers, and bears through a small opening. Live chicken is reportedly a favorite for the animals, as it inspires them to leap on the vehicles to get the grub.

Critics have pointed out that the minute distance between the tigers’ claws and tourists is “an accident waiting to happen.”

According to zoo spokeswoman Chan Llang, however, visitors are aware of the dangers and have been warned “to keep their fingers and hands inside the cage at all times because a hungry tiger wouldn’t know the difference between them and breakfast.”

“We wanted to give our visitors the thrill of being stalked and attacked by the big cats but with, of course, none of the risks.”

When the attraction was launched in 2015, it was sold out for three months. Despite the danger, it seems, tourists prefer to visit an animal in its natural habitat.

With countries like Costa Rica closing all of its zoos, will this type of park become the new norm elsewhere?

This article (In This Zoo, Animals Roam Freely While Humans Are Caged) is free and open source. You have permission to republish this article under a Creative Commons license with attribution to the author and TrueActivist.com