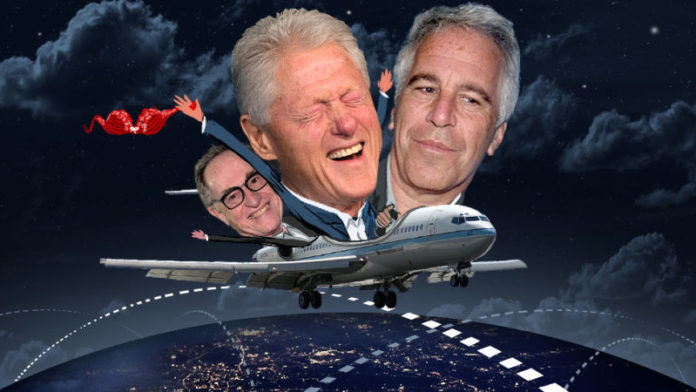 Clinton certainly valued his privacy while on board, ditching his Secret Service detail for at least five of the flights according to the records, which were obtained by Fox News. Apparently, none of the required paperwork for signing the details off were filled.

Did U ask if I think Sec. Clinton should come clean on Mr. Epstein and her scumbag husband? #tcot #ccot #gop #maga pic.twitter.com/kb3zgDoJRI

Court papers show that the police had identified as many as 40 victims, and that police investigators found a “clear indication that Epstein’s staff was frequently working to schedule multiple young girls between the ages of 12 and 16 years old literally every day, often two or three times per day.”

He pleaded guilty in a federally brokered “sweetheart” deal in 2008, for just the one count of soliciting an underage prostitute, serving just 13 months of an 18 month sentence. Work release allowed him to spend most days at his office, and only nights at the county jail in what attorneys Brad Edwards and Paul Cassell described as  “one of the most extraordinarily lenient plea deal arrangements in modern history.”

Interestingly, in 2015 it was revealed that Epstein had allegedly transferred 3.5 million dollars from his Swiss bank account to the Clinton Foundation just as the FBI began its investigation into his activities.

I am not at all surprised the known rapist J. Epstein and one William Jefferson Clinton chilled together many times on Epstein’s rape plane

Originally, it was believed that Clinton had “only” flown on the Lolita on 11 occasions, but the flight logs show that he was a frequent flyer with the convicted pedophile – on a plane, which was reportedly equipped with a bed where passengers could have group sex with young girls.

On trips between 2001 and 2003, he took part in extended flights around the world with Epstein and other passengers… including one named “Tatiana.”

This article (Bill Clinton Flew 26 Times with Convicted Pedophile Epstein on “Lolita Express”) is a free and open source. You have permission to republish this article under a Creative Commons license with attribution to the author(CoNN) and AnonHQ.com.