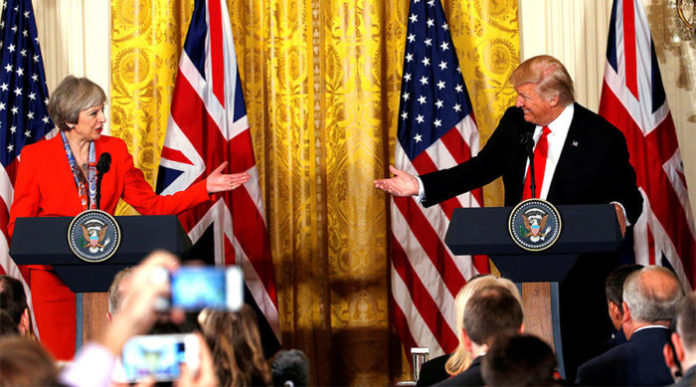 An online petition set up by activists in the United Kingdom to prevent the President of the United States, Donald Trump, from making an official state visit to the country, has garnered over 1 million signatures.

The Parliament of the United Kingdom considers all petitions that get more than 100,000 signatures, for a debate. This means the petition has smashed the number required for the debate in the British parliament.

According to the petitioners, President Trump should be allowed to enter the United Kingdom in his capacity as head of the United States government, but he should not be invited to make an official state visit because it would cause embarrassment to Her Majesty, the Queen of Britain. The petition states further that Trump’s well documented misogyny and vulgarity disqualifies him from being received by Her Majesty the Queen, or the Prince of Wales. Therefore, during his term of office as the president of the United States, he should not be invited to the United Kingdom for an official state visit.

As of writing, over one million people had appended their signatures to the petition. The petition is said to have been initially opened in the immediate aftermath of Trump’s election in November 2016.

If you agree, sign the petition and please RT.https://t.co/ySphksOliV

However, the petition received less attention until recently, when Trump signed an executive order banning citizens from seven Islam-dominated countries in the Middle East from entering the United States, until further notice. Since the order was signed, there have been protests and condemnations around the world. Some of the countries involved have also retaliated, banning United States citizens from entering their countries. Prominent people supporting the petition against Trump include the British Labor Party leader, Jeremy Corbyn. Mr Corbyn tweeted the link to the petition, urging more people to sign the petition. He also said the country’s Prime Minister, Theresa May, would be failing the British people if she does not postpone the state visit and condemn Trump’s actions in the clearest terms.

Lawmakers and community groups who initiated the petition argued that anti-extremist legislation should be used to ban the then presidential hopeful, preventing him from entering the country if he tries. The petition gained nearly 240,000 signatures in less than 48 hours, easily surpassing the threshold of 100,000 required by Parliament to address it.

Meanwhile, BBC reports that the latest petition – which has attracted over a million signatures – has been turned down by the British government. The BBC claims an anonymous source from Downing Street, the official residence of the government, told them the British government rejected the petition because the United States is an important ally, making it a long-term partner.

“America is a huge important ally. We have to think long term,” BBC quoted the source as saying.

.@Theresa_May would be failing the British people if she does not postpone the state visit & condemn Trump’s actions in the clearest terms

Recently, Prime Minister May visited the White House, making her the first foreign leader to do so since Trump became the 45th President of the United States. May announced Trump’s visit to the United Kingdom while in Washington. She gave no specific date, but did say the visit would happen this year.

The BBC source in Downing Street revealed rejection of Trump’s state visit, as being demanded by the petitioners, would be a “populist gesture” and would “undo everything” between the two countries.

Conservative MP for Totnes, Sarah Wollaston said on Twitter in response to the decision by the government, Westminster Hall should be reserved for leaders who have made an outstanding positive difference in the world.

1. On his forthcoming State visit I don’t think Trump should be invited to address both Houses of Parliament from Westminster Hall

But despite the government’s rejection of the petition, many people are still adding their signatures. The petition will run for six months. You can click here to sign the petition and stand united with the British who say no to fascism and bigotry. The Earth is an interconnected place in the universe. We can’t live in isolation because of fear and hate, rather, it should be defeated.

This article (Over 1 Million People Sign Petition to Prevent Trump’s British State Visit, Government Turns it Down) is a free and open source. You have permission to republish this article under a Creative Commons license with attribution to the author and AnonHQ.com.