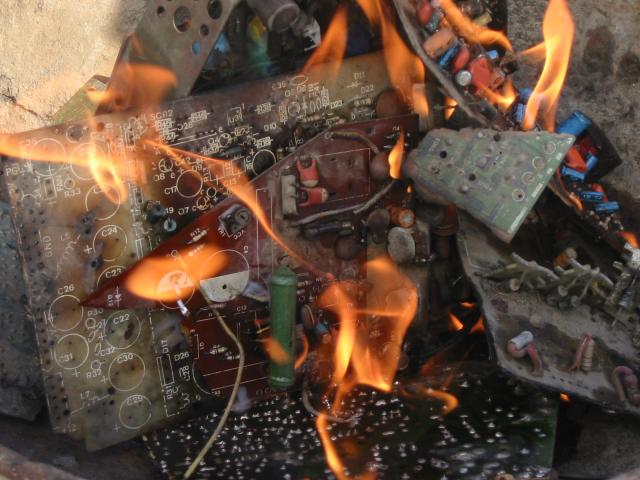 Americans replace their cell phones every 22 months; in 2010 they junked some 150 million old phones. When iPhone first came into the market, 10 million devices that contained PCB, lead, mercury, nickel, cadmium, phthalates, and cholorine, landed in landfill. By 2016, 2 billion people worldwide will have smart phones. We leave you to calculate the deadly numbers.

In developing countries, children pile e-waste into giant mountains and burn it so they can extract copper wires, gold and silver threads and earn a few dollars by selling the metals to recycling merchants. Young boys smash computer batteries with mallets to recover cadmium, toxic flecks of which cover their hands and feet as they work. They inhale the smoke that rises from burned phone casings as they identify and separate different kinds of plastics for recyclers.

The present and future are as grim as the past. Should you worry? Yes. Because THIS is what your phones and laptops are doing to the planet — from its construction to its distribution to its disposal…

In Ghana, workers burn plastic to harvest wire for USB chargers and smartphones. In Utah’s Bingham Canyon Mine, the deepest open-pit mine in the world, miners look for more copper for smartphone USB cables and laptops. Workers in Congo mine gold for circuit boards in smartphones and laptops. This is Berkeley Pit, a copper mine outside Butte, Montana, where copper, gold, silver and other precious metals were harvested. Combined with the metals and chemicals used while mining, the pit has become a giant, toxic lake. This gigantic gold and copper mine in Indonesia provides metals for phone manufacturers.  It belongs to Newmont Mining Corp., the world’s second largest gold miner, accused of dumping dangerous chemical substances from its mining operations in Indonesia’s Buyat Bay. At E-Parisara, an electronic-waste recycling factory in Dobbspet, India, electronic parts collect faster than they can be recycled, leaving big piles of harmful tech trash in the middle of the street. This girl in Guiyu is disassembling disk drives from computers to get the materials held within them. Since the 1980s, e-waste from other countries has ended up in China, broken down in the city of Guiyu, a region of 21 villages where more than 5,500 family-run shops handle the waste. This Article (10 Shocking Photos: How Your Smartphones, Laptops Are Destroying The Planet) is free and open source. You have permission to republish this article under a Creative Commons license with attribution to the author and AnonHQ.com.