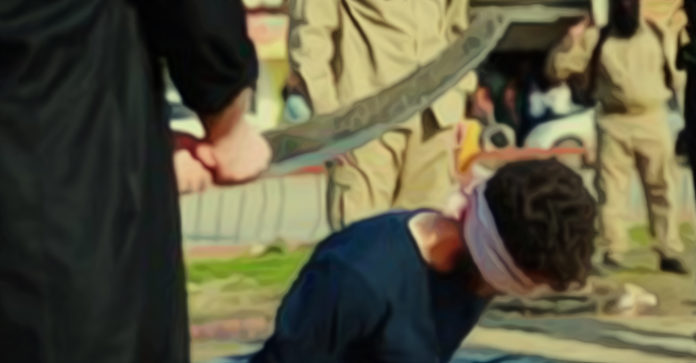 Written by SM Gibson at theantimedia.org

ISIS is coming to get you. The terrorist group, also known as the Islamic State, monstrously beheads its victims. How dare we allow such mammoth human rights violations to take place anywhere in the world, especially in 2015! To stop this travesty, the United States government must violently intervene and continue its cycle of perpetual war in the Middle East. Bombs must be dropped and children must be maimed, but don’t fret, because this is the price of our freedom.

This is, of course, the script recited by politicians and corporate media pundits alike. “ISIS is beheading people, so they must be exterminated,” has almost become a modern mantra for those representing the military-industrial complex.

Is ISIS a vicious collective of terror-inducing cutthroats? Most certainly. Have they beheaded their victims like masked medieval savages? No doubt. But the question remains: Are they the only ones in the world partaking in such barbaric activities? Not by a long shot.

Saudi Arabia, the studious ally of the United States, has just beheaded its 100th person since January 1st of this year. If you aren’t interested in doing the math for yourself, that’s 100 people killed by beheading in only six months. In fact, that number is on pace to crush the record for modern day Saudi executions, according toAmnesty International.

King Salman, who has held the throne since his half-brother, King Abdullah, died on January 23rd of this year, is chasing this murderous record like a juiced-up Barry Bonds of executioners.

Last year saw the most beheadings by Saudi Arabia in the Abdullah era, when 87 people were decapitated over a 12-month span. It has taken the new king only half the time to not only surpass, but obliterate, his predecessor’s morbid milestone.

Saudi Arabia is consistently ranked as one of the worst human rights abusers on the globe. Freedom House, a nongovernmental group that tracks human rights, currently rates Saudi Arabia as one of only 10 countries on the entire planet that are “not free” and awards the nation their lowest possible score.

When King Abdullah passed away earlier this year, how did the U.S. government respond to his death? Gen. Martin E. Dempsey, the chairman of the Joint Chiefs of Staff, sponsored an essay contest—via the Department of Defense—to honor the late monarch. President Obama also went on the record to say that, “King Abdullah’s vision was dedicated to the education of his people and to greater engagement with the world,” and that he “always valued King Abdullah’s perspective and appreciated [their] genuine and warm friendship.”

Since Washington is prone to focus on the atrocities carried out by one group while completely turning a blind-eye on another committing  identical crimes, the question now becomes, why are “We the People” not calling out our elected officials on blatant hypocrisy?

The Bush family has famously consorted with the Saudi royal family for years, despite its substantiated human rights abuses. The Clinton Foundation has accepted anywhere from $10 million to $25 million from the Kingdom of Saudi Arabia since 1999. Not so ironically, both of these families are once again vying to become president of the United States. We were even told that 15 of the 19 hijackers on 9/11 were Saudi Arabian and the U.S. government’s response was to bomb Iraq!

Meanwhile, we are supposed to believe that the Saudi’s are our allies while we champion  even more bloodshed in neighboring Middle Eastern nations. Nations, who by the way, Saudi Arabia has had a history of feuding with.

Have you started to notice a pattern yet?

The next time you hear someone say that the U.S. engages in military conflict for “moral reasons” or to “liberate an oppressed people,” please show them this article and kindly suggest that they cease viewing the world through star-spangled lenses and start realizing that we’ve all been duped.

Either that, or you can tell them to shut up.