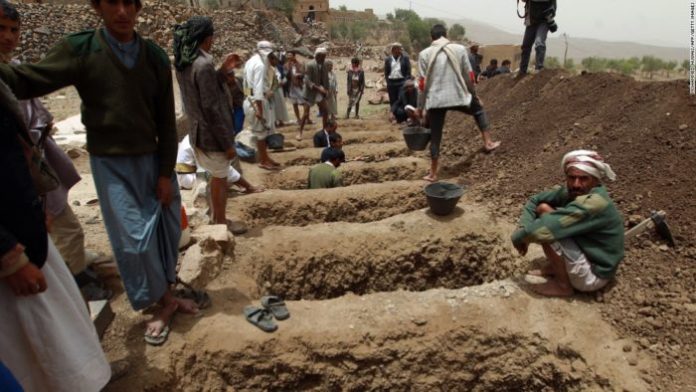 The so-called war on terror waged around the world by the United States is still raging on. The truth about this war is that every single bullet or bomb fired by United States forces drives dozens of people into the hands of militants.

The war is not hitting terrorists, as the Pentagon wants us to believe. It is the innocent civilians who are bearing the brunt of United States’ firepower. Since the United States started the war on terror in the Middle East in 2001, literally countless amounts of civilians have lost their lives in the region. In February 2017, the United Nations Assistance Mission in Afghanistan (UNAMA) revealed that it recorded a record high civilian death and injuries on the United States war on terror in Afghanistan the previous year. UNAMA said Afghan civilian casualties’ figures in 2016 – killed or maimed from the war – stood at 11,418.

When this announcement was made by UNAMA, a former top Central Intelligence Agency (CIA) official, Jack Rice, said the indiscriminate killings of civilians by United States armed forces in Afghanistan are driving the country’s civilian population to join militant and other terrorist groups in the country. Mr Rice stated that the U.S.-led war against terror in the country is a complete sham. According to him, the rise in civilian casualties in wars waged by the United States in the Middle East and other parts of the world is a single contributing factor to the proliferation of militant and terrorist groups in these areas. However, the United States government isn’t bothered by critics such as Mr Rice. The wars still continue and more civilians die.

Recent raids by the United States military on alleged al-Qaeda training camps in Syria and Yemen have left over 100 innocent people dead, according to human rights groups monitoring the situation in the two restive countries.

Recently, the White House announced that it is sending ground troops to Syria – though unrequested by Assad. But the truth is that U.S. ground troops have been in Syria and Yemen for some time now.  The troops gather intelligence, as well as carrying out covert raids on militants’ bases in the countries. In late January, President Donald Trump authorized a raid on an alleged al-Qaeda headquarters located in the al Bayda Governorate in Yemen. After the raid, the Pentagon described it a success. But human rights activists told media outlets that the raid only succeeded in killing many civilians.

This compelled the United States Central Command to say its internal review team “concluded regrettably that civilian non-combatants were likely killed in the midst of a firefight” during the raid, adding that casualties may include children.

Although initial reports suggested around 10 civilians died in the raid, a subsequent investigation carried out by the BBC revealed over 50 civilians perished – the majority of them were women and children. Local residents told the BBC that although some militants sporadically use their village as a meeting place, as of the time the United States forces arrived, no militants were present in the village. Residents categorically denied the Pentagon’s claim that their village is a headquarters for al-Qaeda in the al Bayda province.  They revealed that when the United States forces arrived and started shooting, many in the village were confused, and because the country is at war, many residents have guns. They also opened fire, leading to many bombs being dropped on them by fighter jets. Residents said they retrieved over 50 bodies, many of them burned beyond recognition. The death toll was also confirmed by activists who visited the village. As this appalling situation just passes, on March 16, U.S. drone aircraft fired missiles and dropped a 500-pound bomb outside the city of Aleppo in Syria. As usual, the Pentagon said the raid targeted al-Qaeda militants, and that it killed scores of them.

But activists have said the raid never hit any militants. According to activists, the bombs were dropped on civilians who had gathered at a local mosque in Jinah for a religious activity. It is said over 46 civilians were killed in the raid.

The Western-backed Syrian Observatory for Human Rights described the scene as a “massacre,” revealing the dead were mostly civilians. Photos from the area showed rescue workers pulling mangled bodies from a mound of rubble. “Bodies filled the space,” said Mohamed al-Shaghal, a journalist who arrived at the scene shortly after the attack. He said the mosque was completely destroyed, adding that many residents are now living in fear as they don’t know when the next bomb will drop.

This article (Over 100 Civilians Dead After Recent U.S. Raids on Alleged al-Qaeda Training Camps) is a free and open source. You have permission to republish this article under a Creative Commons license with attribution to the author and AnonHQ.com.