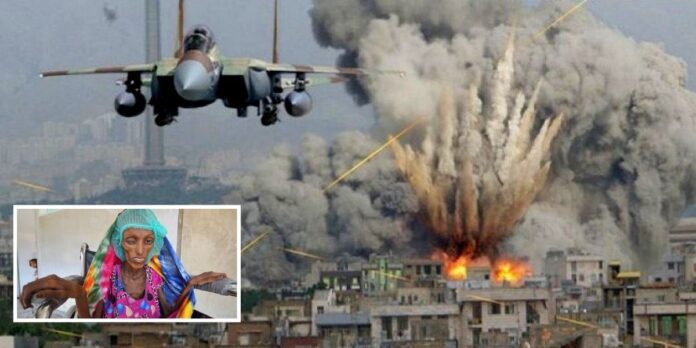 Three out of four Yemenis will depend on food assistance in 2022, United Nations (UN) officials said ahead of a high-level pledging conference that aims to raise funds for the war-torn country. The UN has stressed that $4.3bn is needed to address Yemen’s food shortages this year and prevent 19 million people from going hungry, and it hopes that attendees at the conference will meet that goal on Wednesday in Geneva.

“As of now, funding is drying up and agencies are stopping their work in Yemen,” UN Under-Secretary-General for Humanitarian Affairs Martin Griffiths said on Tuesday. “We need to replenish the food pipeline, provide shelter and send a message to Yemenis that we do not forget them.”

Officials have described a looming catastrophe in the Middle Eastern country, which is entering its seventh year of conflict.

The fighting pits Iran-allied Houthi rebels, who control many of the country’s most populated regions including the capital Sanaa, against the internationally-recognised Yemeni government. A Saudi-led coalition backs the Yemeni government, and has led an air campaign against the Houthis since March 2015.

At the beginning of the year, the UN’s World Food Programme (WFP) was forced to reduce food rations for eight million people due to a funding shortage, with households receiving barely half of the WFP standard daily minimum food basket. Now the shortage of funds is putting five million more at risk of slipping into famine-like conditions.

Griffiths, the former UN special envoy to Yemen, said the dire humanitarian situation in Yemen may get worse, as wheat imports from Ukraine, which supplies some 40 percent of Yemen’s grains, may come to a halt.

“Ukraine is a breadbasket for many countries and needs to remain so,” said Griffiths, warning of the knock-on effects the Russian war on Ukraine may bear on other conflict areas that depend on the country’s wheat production.

In a report published on Monday, the UN’s WFP, its Food and Agriculture Organization (FAO) and its United Nations Children’s Fund (UNICEF) warned that the humanitarian situation in Yemen is poised to get worse between June and December 2022.

Some 19 million people are projected to be in need of food assistance, an increase from the current 17.4 million. Of these, 7.3 million people will be facing emergency levels of hunger.

In addition, around 1.3 million pregnant or nursing mothers are acutely malnourished. New data also shows that the number of people experiencing famine conditions is projected to increase fivefold, from the current 31,000  to 161,000 in the second half of 2022.

“Peace is required to end the decline,” said UN Resident and Humanitarian Coordinator for Yemen David Gressly in a statement on Tuesday. “The parties to the conflict should lift all restrictions on trade and investment for non-sanctioned commodities. This will help lower food prices and unleash the economy.”

Yemen’s economy has collapsed amid a Saudi-led coalition blockade of its main ports, which is limiting access to food and fuel, as well as non-essential commodities entering the country. Parties to the conflict, including the Houthis and the Yemeni government, have also restricted the transfer of fuel and goods across the country.

Food prices have more than doubled in 2021, while during the same period many salaries have not been paid and remittances have stagnated due to COVID-19.

“We need to inject liquidity, lift restrictions on imports and remove the blockade of the main ports as well as resume flights into the country,” said Griffiths. “While I understand there is a UN Security Council arms embargo and shipments need to be checked and inspected, we have to let in food and fuel.”