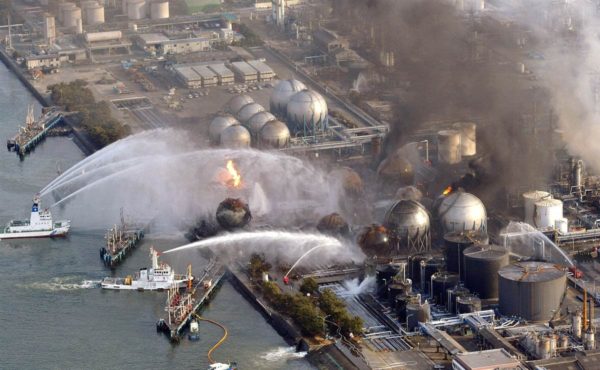 The nuclear disaster has contaminated the world’s largest ocean in only five years and it’s still leaking 300 tons of radiation every day.

On March 11, 2011, a tsunami, caused by a major earthquake, disabled the power supply and cooling of three Fukushima Daiichi reactors in Japan, causing a nuclear accident. As a result, a large quantity of radioactive material leaked into the Pacific Ocean.

Since the disaster, many observers and researchers have expressed concerns about the safety of the area in which the disaster occurred. The Japanese government has had to defend many times; claims by activists, that large parts of the country have been exposed to dangerous radioactive materials. However, with the latest news of the disaster, officials of the International Atomic Energy Agency (IAEA) have now admitted that almost one-third of the world (The Pacific Ocean) has been contaminated by the nuclear waste that has leaked from the Fukushima reactors.

When the disaster happened, countries based around the Pacific Ocean were on high alert, due to the potential economic and environmental implications of the disaster. This prompted the IAEA, together with the Regional Cooperative Agreement (RCA) Member States to establish the Technical Cooperation (TC) to monitor the presence of radioactive substances in the marine environment. The TC was also to ensure that seafood from the region was safe for consumption, and to maintain a comprehensive overview and full facts of the accident, considering its grave implications. The first TC annual review meeting was held in August 2012, to demonstrate predictive hydrodynamic models. Experts then predicted that the strong current, known as the Kuroshio Current and its extension, had the ability to transport the radioactive substances across the Pacific Ocean in an easterly direction. During the meeting, the concentration of radioactivity was not as high as originally thought.

However, in July 2014, a field study conducted by the TC revealed from two sets of seawater samples, that two filter cartridges were coated in radioactive substances – the elements of cesium.

Again, in 2015, trace amounts of cesium-134 and cesium-137 turned up in samples collected near Vancouver Island in British Columbia, Canada. The samples were collected by an independent monitoring body. In fact, this was the first time that traces of cesium-134 had been detected near North America’s waters. The Integrated Fukushima Ocean Radionuclide Monitoring Network said the only possible source of these radioactive elements is the Fukushima disaster. The IAEA then realized the seriousness of the accident, admitting that the Pacific Waters have been contaminated. When this discovery was made, it sparked anxiety and concerns. Although experts later tried to calm the tension by saying the substances detected were not high, we know for sure that the danger of radioactive material in any amount cannot be underestimated.

According to Ken Buesseler, a marine chemist at Woods Hole Oceanographic Institute in Falmouth, Massachusetts, the problem with nuclear energy and fallout is that the radiation and radioactive materials can travel great distances with the help of the wind and the sea.

Buesseler said that the officials of the IAEA should aim on a global level to keep these levels at zero. He also said the monitoring of the oceans by the officials was warranted, in order to avoid a major human disaster.

Already, the oceans are filled with all sorts of waste. Even the IAEA recommends that contaminated water be discharged into the sea. Apart from nuclear waste getting into the sea, there are other industrial wastes that are also being discharged into the sea. If we don’t take care, it will get to a point where every single fish we catch from the sea will have to be tested for radioactivity or other equally poisonous substances.

Our lives depend heavily on the sea. If it is poisoned, livelihoods could be affected, as well as the long-term health of the global community, as a whole. Any waste discharge in the sea will have to be controlled, and continuous monitoring is needed. Governments should also encourage safe inventions, such as renewable energy technologies, rather than nuclear. We can’t afford to surrender our reasoning to technologies that will harm us.

This article (1/3 of World’s Oceans Poisoned by Fukushima Nuclear Disaster, Dangerous Substance Detected in North American Waters [Video]) is a free and open source. You have permission to republish this article under a Creative Commons license with attribution to the author and AnonHQ.com.