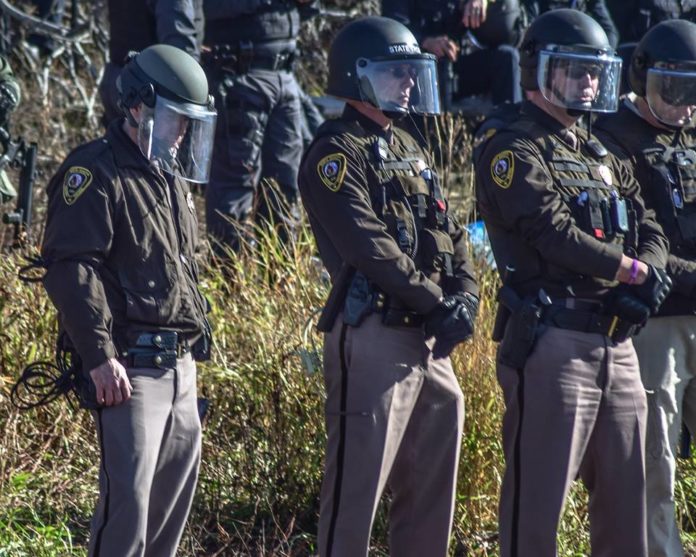 Earlier today it was reported by Redhawk at Standing Rock in North Dakota that two police officers have turned in their badges in support of the water protectors.

“There have been at least 2 reports of police officers turning in their badges acknowledging that this battle is not what they signed up for. You can see it in some of them, that they do not support the police actions. We must keep reminding them they are welcome to put down their weapons and badge and take a stand against this pipeline as well. Some are waking up.”
-Redhawk

With actions from militarized police continuing to be seen as extremely violent and dangerous, this news is a big win for the water protectors and for humanity as a whole. While the actions of some police officers are not appropriate, we all must continue to visualize and intend/pray that the hearts of all involved in this situation continue to open. Police must be held accountable for their actions, though we must continue to welcome them over to the side of the water protectors.

Having the police lay down their weapons and join the people is the goal. It is also a win-win solution, which is the best case scenario. So what is it that opened the hearts of these two officers?

At the time of this writing, the answer is not known but we can speculate on a few different items.

Take a look at what happened in Frankfurt, Germany in May of 2012. The police removed their helmets and began marching with the people who were protesting the big banks, while also safely escorting them down the streets.

Let us all use this latest news as a big step forward towards peace and resolution of this pipeline issue. The pipeline construction needs to and must stop. With the announcement from Barack Obama yesterday that the White House is considering “re-routing” the pipeline, we must continue to demand that it’s construction cease entirely. We can also view that statement as a buckling of the Establishment. Continue on, water protectors. Truth and love is spreading.