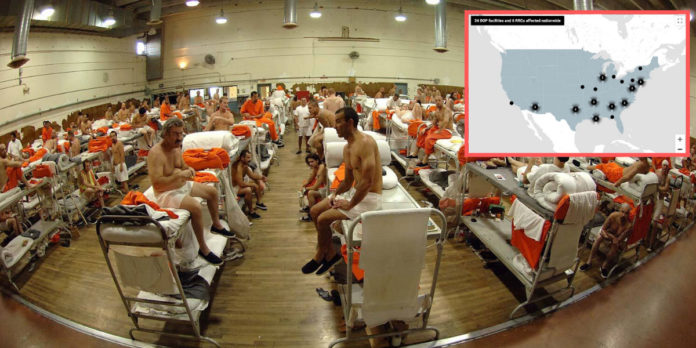 The US Bureau of Prisons reports that 241 federal inmates and 72 employees have tested positive for coronavirus. 34 prisons and 6 BOP halfway houses have been impacted so far.

According to the Wayback machine’s archive of the BOP’s COVID-19 page, here’s the trajectory of the outbreak(s) so far:

And a map of the facilities.

The ACLU has been filing lawsuits and injunctions to try and get more ‘nonviolent’ offenders at these facilities freed to save them from being exposed to the virus. In the suit, filed yesterday, the organization filed a lawsuit against Oakdale arguing that AG Barr’s decision to free some prisoners didn’t go far enough, because of the prison’s horrendous conditions.

Meanwhile, earlier, we learned that the BOP recently purchased a sizable stockpile of President Trump’s favorite drug for the treatment of COVID-19: Hydroxychloroquine.

Apparently, the administration is trying to avoid repeats of what happened in NYC after Mayor de Blasio released hundreds of nonviolent offenders.

The layoffs stem from the fact that the NRA was forced to cancel its annual meeting, an event that typically nets it millions of dollars, Politico reports.

Update (1835ET): Germany just reported 4,312 new cases of coronavirus, and 210 new deaths, bringing its total to 107,663 cases, and 2,016 deaths. The 210 number is unusually high for Germany, which has consistently boasted one of the lowest mortality rates in Europe, even as deaths have crept upward in recent days. 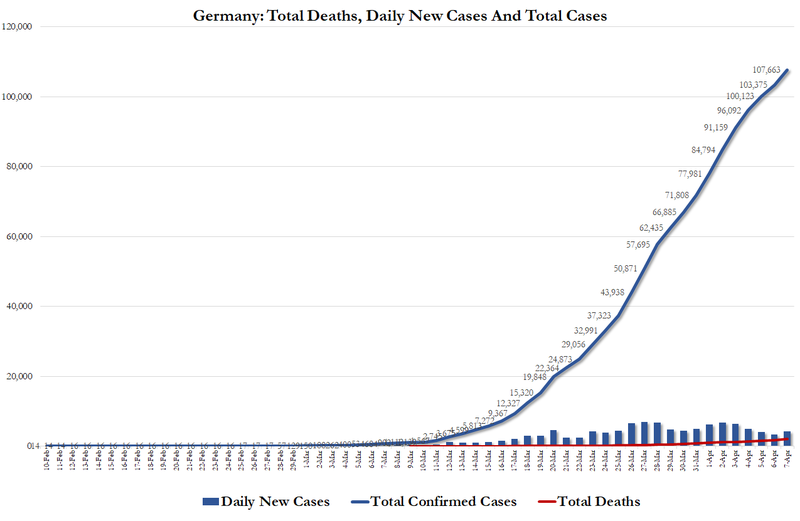 It’s just another figure that makes one question the ‘good news’ narrative forming around Europe: Apparently, the market has it’s doubts, too.

Meanwhile, President Trump kept up the optimistic jawboning during his press conference by claiming that the US death toll might be smaller than expected.

Update (1750ET): Trump & Co. are delivering Tuesday evening’s press conference. Meanwhile, on the other side of the world, thousands of residents of Wuhan are waking up and getting ready for what might be a dash to the train station as a state rail operator said it expects 55k people to leave Wuhan by end of day Wednesday.

Update (1650ET): We have new numbers out of Portugal, India

Portugal reported 712 new cases, and 34 new deaths, bringing its totals to 12,442 cases and 345 deaths. India reports 573 new cases of coronavirus and 26 new deaths, bringing the countrywide total to 5,351 cases and 160 deaths, minuscule numbers that help feed speculation that the Indian government is covering up the true extent of the outbreak. On Tuesday, the number of cases in Mumbai, home to some densely populated slums, saw a notable jump

Update (1521ET): Spain just followed up some more encouraging data out of Italy with another disappointment. Spain’s pace of coronavirus deaths ticked up for the first time in five days on Tuesday, with 743 people succumbing overnight, but there was still hope the national lockdown might be eased soon.

Tuesday’s toll from the health ministry compared to 637 deaths registered during the previous 24 hours, taking the total to 13,798, the second highest in the world after Italy. Still, the proportional daily increase of 5.7% was about half that reported a week ago.

The government dismissed the jump as a normal “oscillation”, and blamed it on some delayed notifications from over the weekend.

“It is normal to have some oscillations…What matters is to see the trend and the cumulative data,” Maria Jose Sierra, deputy chief of health emergencies, told Reuters.