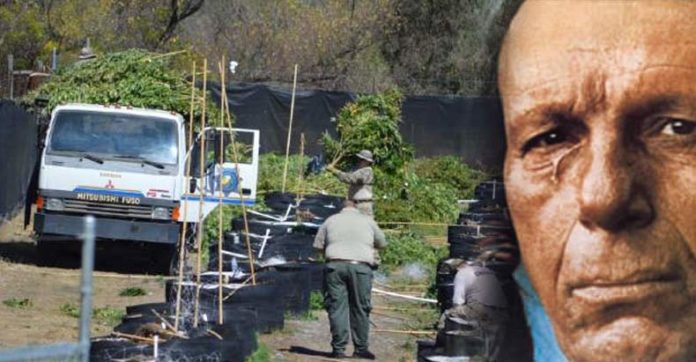 The tribe had been working in collaboration with FoxBarry, a Kansa company that helps Native American tribes develop for-profit ventures, and United Cannabis, a Colorado company that develops strains of marijuana, to create the first large-scale medical marijuana cultivation and distribution enterprise on tribal land in California.

However, the tribe’s venture—which would not only help those in need of the medicinal plant but would also create jobs and revenue for the tribe—was destroyed by deputies from the Mendocino County Sheriff’s Office.

According to the Press Democrat:

Deputies eradicated some 400 pot plants from an outdoor location. At another location, they began dismantling a “highly sophisticated” chemical laboratory where honey oil — a sticky, concentrated pot product used to make edible medicine— was being manufactured under the auspices of the Pinoleville Pomo Nation, said Sheriff’s Capt. Greg Van Patten. More than 100 pounds of trimmed and drying marijuana also was found inside the laboratory building, a former car dealership on North State Street.

“I think what they’re doing is not right,” said Nori Baldridge, the tribe’s director of economic development. “This is sovereign land, and this is a sovereign nation,” she said.

“We were shocked,” said Mike Canales, president of the tribe’s business board.

As the Sheriff’s department has no authority over the tribal land or its people, Canales has contested the legal basis for the raid.

In an attempt to justify their trespass, destruction, and theft of property, Van Patten later stated that the tribe’s attempt to use the operation as a source of income is in violation of state law. “Having any kind of financial gain as your motivation (for growing marijuana) is against state regulations,” Van Patten said.

However, back in January, it was reported that the tribe would build a 110,000 square-foot marijuana growing facility on its 99-acre Rancheria near Ukiah. The announcement came after the U.S. Department of Justice announced late last year it would not prosecute tribes for growing or selling marijuana on tribal lands.

As a result, claims surrounding the contents of the warrant have arisen. According to the Free Thought Project, Canales has implied that the raid was political and that the warrants used contained false information, such as claiming the garden guards were armed. However, despite the devastating damage that was caused by the unjust raid, Canales has said that the event is only a setback on the operation, and the tribe intends to fight the crackdown.

“We are not criminals. We are very confident that we can demonstrate that absolutely no criminal activity was taking place on our Indian Lands,” said Angela James, Tribal Vice-Chair for the Pinoleville Pomo Nation. “It is the Tribe’s intention to seek all legal remedies against the Mendocino County Sheriff’s office for publicly putting forth unproven allegations and flagrantly acting outside of its authority.”

This Article (Cops Raid Native American Reservation And Destroy Medicinal Marijuana Venture) is free and open source. You have permission to republish this article under a Creative Commons license with attribution to the author and AnonHQ.com.