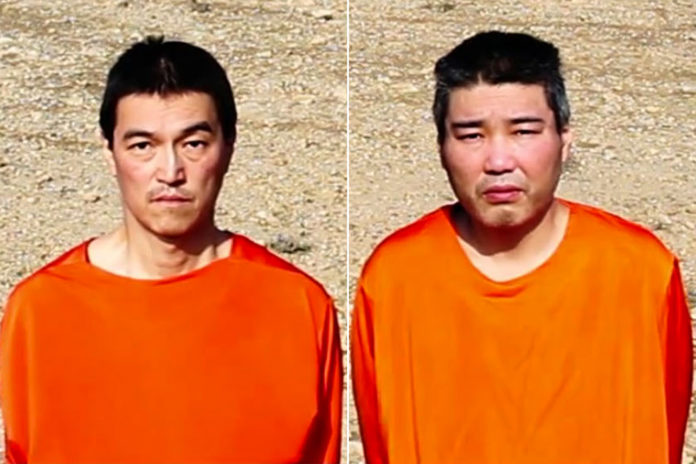 Japan is well-known for its pacifist constitution- and the Japanese people have often protested to protect their constitution against Abe’s long-term goal of reviving its militaristic past. Specifically, Abe wishes to amend article 9 which states:

“…the Japanese people forever renounce war as a sovereign right of the nation and the threat or use of force as means of settling international disputes.”

Article 9 has caused Japan great embarrassment; for example, Japan had to decline when the US pressured it to send troops to die in the recent war in Iraq which destabilized the Middle East, and the Gulf War before that. Instead, its involvement in Iraq has been limited to the deployment of medical personnel.

Suffice to say, last year ISIS would rush in to provide Japan with a reason (for its own esoteric purposes) to up the war-rhetoric by beheading two innocent Japanese; a gift it had already bestowed to the war economies of America, Europe and Russia.

This video was published last year by VICE News, which had interviewed leaders and activists of the far-right groups pushing for constitutional reform and briefly spoke with a few left-wing activists who opposed such change. The emphasis and spot-light was given to the right-wing groups, who explained their reaction to the ISIS beheadings.


The video reveals how the Japanese far-right really feel about the death of their fellow Japanese.

“I’m not surprised at all that they were killed, they were the ones who chose to go to such a turbulent area, after all… not surprised,” said Shinichi Kamijo, a right-wing activist.

When asked how he felt about the deaths of the two, and whether it was revenge that he wanted for them, the activist did not even attempt to disguise his contempt for the men.

“I guess I don’t think of them as fellow Japanese. Their way of thinking is completely different than mine. They leaned towards the left wing. I don’t want anything to do with them.” He did not want anything to do with the two, beyond to use their deaths as fuel for his rhetoric. The deaths of his fellow Japanese was a boon, not a tragedy; their deaths expected and due to their own weak left-wing thinking.

(Fun fact: Abe’s grandfather, Nobusuke Kishi, was a former “Class A” war crimes suspect who was released by the American government because they believed that he would lead the country in a pro-US direction. He had allowed the enslavement/ “conscription” of hundreds of thousands of Manchurian factory workers.)

In 2014, Japan’s government approved a reinterpretation of the article which allowed Japan to exercise military action if one of its allies were attacked- a constitutional amendment would have required a two-thirds majority and pass referendum to take effect, and has proven too difficult for Abe’s party to achieve so far.

This reinterpretation came despite the fact that a majority of Japanese still opposed the changes he has pushed.

This Article (Japan VS ISIS) is free and open source. You have permission to republish this article under a Creative Commons license with attribution to the author(CoNN) and AnonHQ.com.